Sharma Lewis long expected to be known as “Doctor” — not “the Reverend” and certainly not “Bishop.”

However, after she landed on the waiting list for medical school, a beloved aunt suggested God might have other plans for the biology major.

“She challenged me,” Lewis recalled of her conversation with the late Rev. Essie C. Simmons. “She said, ‘I feel like God has a call on your life.’” 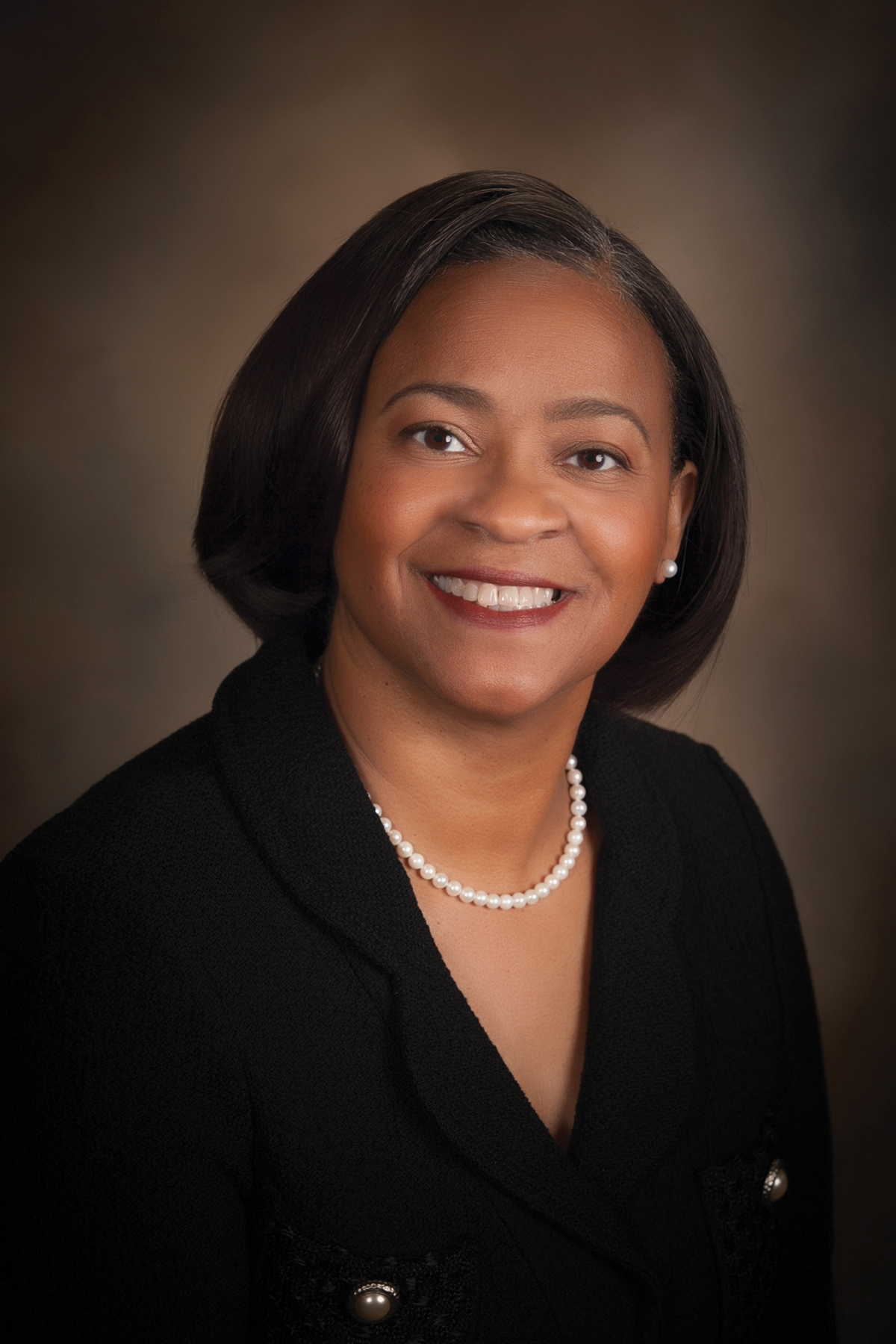 The third-generation United Methodist took her aunt’s words to heart. After long and fervent prayer, she heard God urging her to ordained ministry.

While not the first in her family to wear a clerical collar, Lewis has embarked on a career as a groundbreaker — often serving as the first woman or first African American in various ministry settings in the North Georgia Conference. She most recently served as the first female superintendent of the Atlanta-Decatur-Oxford District.

It was her second time as a bishop candidate. The conference required 60 percent of the vote for an election. Lewis received more than 71 percent.

On Sept. 1, she began leading the Virginia Conference, the second largest United Methodist conference in the United States with 1,169 congregations and 327,647 members.

The bishop, whose vocation changed from healing bodies to healing souls, now has the opportunity to help heal a denomination strained by declining U.S. membership and intensifying theological debate around homosexuality.

“I love the church; I love God’s people,” Lewis said. “I still believe The United Methodist Church has a lot to offer, and I still believe folks need Jesus.”

United Methodists who have worked with Lewis say that like her biblical hero, Esther, the new bishop has the leadership gifts “for such a time as this.” She has admirers across the denomination’s theological spectrum.

“She has a grasp doctrinally and theologically of how the church can move forward, and I think that can be one of the greatest gifts she can give,” said the Rev. Steve Wood, lead pastor of the multi-campus Mount Pisgah United Methodist Church in Johns Creek, Georgia.

Family: Single. She remains close to her mother, Aleathia Lewis, two surviving sisters and a brother. Her father and a sister have passed away.

Proverbs 3:5-6: “Trust in the Lord with all your heart and lean not on your own understanding; in all your ways submit to him, and he will make your paths straight.”

Jeremiah 29: 11: “I know the plans I have in mind for you, declares the Lord; they are plans for peace, not disaster, to give you a future filled with hope.”

Favorite hymns: “Come, Thou Fount of Every Blessing” and “Blessed Assurance”

Recent books that made a strong impression: “The Rule of Benedict: A Spirituality for the 21st Century” by Joan Chittister, “Defying Gravity” by the Rev. Tom Berlin, and “God’s Graffiti: Inspiring Stories for Teens” by the Rev. Romal Tune.

Hobbies: Working out in a gym, watching movies

What about you would surprise even those who know you pretty well? I am actually the 14th pastor in my family.

A lifelong love of church

Lewis, 52, grew up attending Brannen Chapel United Methodist Church in her native Statesboro, Georgia. Her parents, who owned multiple small businesses, made certain faith was at the center of the family’s life.

Saturday was for completing Sunday school lessons and ironing one’s Sunday best; Sunday was for worship and family dinner.

“We couldn’t wash clothes; we couldn’t play outside,” Lewis recalled. “It was very strict.”

That was fine by Lewis. She remembers always feeling at home in church and among church people. “Looking back, I really felt God had put a love of the church in my heart,” she said.

Although a number of people suggested she consider becoming a pastor, Lewis said it wasn’t until her Aunt Essie’s push that she “surrendered to God.”

Her first appointments were as an associate and later senior associate pastor at Ben Hill United Methodist Church, an 8,000-member church where Lewis said she felt loved. Strengthened by that experience, she offered herself for a cross-racial appointment.

Thus began what she acknowledges was her toughest assignment.

At Powers Ferry United Methodist Church in Marietta, Georgia, Lewis was not only the largely white congregation’s first African-American pastor, but also its first woman. Some families left the church before she arrived. Still others refused to shake her hand whenever she stood in the narthex greeting parishioners.

“The experience of Powers Ferry strengthened my spiritual disciplines of prayer and fasting,” she said. “My experience made me look in the mirror and ask, ‘Do you just want to pastor black folks or do you want to pastor God’s people?’”

She learned she had to depend on God.

The Rev. Betty Jones, a now-retired pastor who served in Lewis’ district, said the new bishop knows intimately the difficulties clergy can face. Jones, who has faced her own challenges as a female pastor, said Lewis has a record of recognizing people’s talents and lifting them up.

“She is the reason why 11 years later I am still in the church,” Jones said.

Lewis said being a trailblazer “means showing if I can do it, you can do it, and you can probably do it even better than me.”

Lewis next became the first female pastor in the 140-year history of the Wesley Chapel United Methodist Church, an African-American congregation in fast-growing McDonough, Georgia. When church leaders asked her what to tell people about getting a woman in the pulpit, she said, “Tell them to give me a chance.”

People did, and under her leadership, the congregation added 600 new and restored members and saw its worship attendance double. She received the North Georgia Conference’s 2010 Harry Denham Award for Evangelism. To her surprise, she also became the first woman to receive the G. Ross Freeman Leadership Award, the Southeastern Jurisdiction’s award for strengthening United Methodist Men.

“Because of the example she sets daily, we are a happy church — a vibrant church — a praying church and a willing vessel to be used by God!” wrote Col. Scott Malone, an active United Methodist Men member and then the congregation’s lay leader, in nominating her.

Before she arrived at Wesley Chapel, Lewis got the church directory and memorized people’s names and faces. “I remember when she walked up to my husband, who did not know she was our new pastor, and said ‘Hello, Mr. Cochran,’” his wife recalled. “Not many people can do that.”

Lewis also encouraged members to invite friends to church, and under her leadership, the church started to become multiracial.

As district superintendent, Lewis promoted growth throughout her district, said the Rev. Ronny Brannen, the chair of her superintendency committee. He credits Lewis with helping his congregation, Prospect United Methodist Church in Covington, Georgia, salvage a nearby dying church to become multi-site. The new site, which once averaged five people on a Sunday, now regularly sees 45 worshippers and more than 15 youth.

The United Methodist News Service is profiling the first-elected bishop in each U.S. jurisdiction. Next up: Bishop Cynthia Moore-Koikoi.

Call to the broader church

United Methodist bishops not only lead the areas where they are assigned but also provide general oversight of the denomination.

Lewis takes on this role as The United Methodist Church faces talk of schism because of differences around ministry with lesbian, gay, bisexual, transgender and queer or questioning individuals.

Bishops are forming the Commission on a Way Forward with the task of trying to bridge these deep divisions and preserve church unity.

“She is someone who is deeply committed to the unity of the church because she recognizes the power that the church has to influence the world — not just people’s spiritual life but their health and welfare,” he said. “We improve people’s lives all over the world, and we are able to do it through the strength of the connection.”

Lewis is one of the bishops who has volunteered to pray each day for the commission’s work.

“I believe it’s not time for anyone to run,” Lewis said. “I believe we need to allow the process to work itself out under the unction of prayer and the Holy Spirit.”