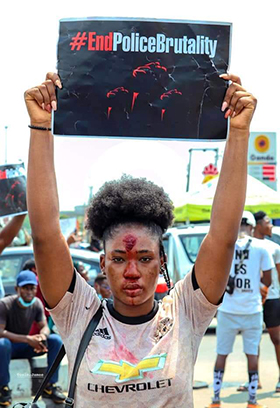 A woman — wearing makeup to look like blood in protest of police brutality — holds a sign at the Lekki toll gate in Lagos, Nigeria. Demonstrations there turned deadly on Oct. 20. Photo by the Rev. Ande Emmanuel, UM News.

Nigeria Area Bishop John Wesley Yohanna is calling on the government of President Muhammadu Buhari to address the protests going on in the country through dialogue rather than police and military forces.

According to Amnesty International, the Nigerian army and police killed at least 12 protesters on Oct. 20 at two locations in Lagos. The group said hundreds were injured. At least 56 people have died since the protests against police brutality began on Oct. 8, Amnesty reports.

Several United Methodist pastors said they were witnesses to the violence.

Bishop Yohanna called a press conference on Oct. 21 at the United Methodist headquarters in Jalingo to address the state of the nation.

“The current protest going on in many major cities of this country is a sign that Nigerians need true police reform that will end police brutality in this country,” he said. “I want to call on the government at all levels to use dialogue as a means of settling this protest (rather) than police and military force.

“It is important for the government to note that anyone who desires peace must work for and cherish justice.”

The demonstrations started as a call to disband the Special Anti-Robbery Squad, or SARS, which has been accused of extrajudicial killings and other abuse. The protesters, mostly young people, have tagged the movement #EndSARS and #EndBadGovernance on social media.

The protests have extended to other African nations and have drawn the attention of celebrities who have spoken out on social media against police violence in Nigeria.

“The Lekki toll gate in one of the suburbs of Lagos, where #EndSARS protesters have camped (for two weeks), has seen a bloody Tuesday, where uniformed men opened fire and soldiers were seen barricading the protest site before the shooting. Not less that 38 persons have died at the Lekki toll gate,” he said.

Barkuma told UM News that churches in Lagos have been providing drinking water and snacks to the protesters.

In Abuja, Absolom Nuhu, pastor-in-charge of Gwarimpa United Methodist Church, said thousands of people, predominantly young adults, were seen protesting on major streets of Abuja on Oct. 19 and 20, including the highway that led to the international airport.

“They were attacked on Monday (Oct. 19) by a team of soldiers and policemen, leaving at least two people dead and one critically injured around the busy street leading to Aya roundabout,” Nuhu said. 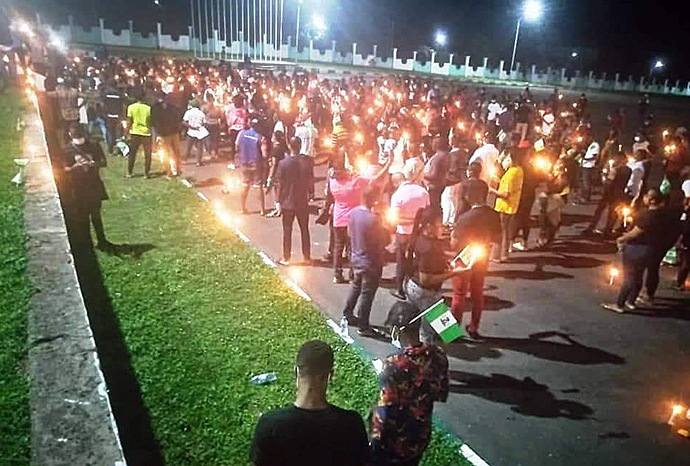 Protesters at the Ahmadu Bello Way in Jos, Nigeria, hold candles and chant liberation songs on Oct. 20. At least 56 people have died since the protests against police brutality began on Oct. 8, according to Amnesty International. Photo by the Rev. Christopher Thomas.

“Protesters barricaded the highway into the city center on Tuesday, Oct. 20. Gunshots of the police and military shooting were heard sporadically. Blood is flowing on the streets. Only God knows exactly how many people this will affect. Many were wounded by live bullets and are laying down lifeless,” he said.

In response to the #EndSARS movement, the government announced the disbanding of the Special Anti-Robbery Squad, however, Matthew Ajao, one of the protesters in Lagos, said that does not go far enough.

Sam Smith Abba, a graduate of United Methodist Africa University in Zimbabwe who has been protesting in Jalingo, echoed those concerns.

“The government has earlier announced the disbandment of SARS and yet announces the formation of SWAT (a Special Weapons and Tactic team), which seems to be another form of SARS.”

He said protesters have other demands beyond eliminating the special police unit.

“Besides these, we are demanding for justice for our families and friends who have suffered police brutality in one form or the other. Our condition of living is very poor; we do not have access to good education, health care, security and infrastructural development. We are demanding for good governance,” Abba said.

The United Methodist Church in Nigeria is continuing to look for ways to be in community with those who are hurting and to help develop a more effective response to these types of challenges.

The Nigeria Episcopal Area’s Board of Church and Society is organizing congregational and community engagement training and advocacy using the Social Principles of The United Methodist Church as a guide. The events will take place in Lagos, Jos, Abuja, Port Harcourt and Ibadan, the hotspots of the ongoing protests.

Emmanuel is the administrative assistant to the bishop of the Nigeria Episcopal Area of The United Methodist Church.

Aides to bishop report fellow United Methodists to police for allegedly disturbing the peace, with four of them ultimately landing in jail on spying charges. West Africa College of Bishops plans to send delegation to Nigeria to meet with opposing parties.
Global Health

Angola West Conference mobilizes to provide food and other relief as heavy rains destroy homes and other infrastructure.