When the Rev. James K. Karpen offered some background about the United Methodist Church of St. Paul and St. Andrew to members of its new resident theater company, he described it as the church of “why not.”

In some churches, he told them, people suggest trying something new and others immediately respond with all the reasons why it can’t be done. “I was sharing that my experience here was the opposite,” he recalled. “When people have a heart for doing something, people here are very supportive.”

So, when Theatre 167 created a play about its new home on Manhattan’s Upper West Side – which runs Feb. 20-March 15 – there was never any question that pastor’s description would become the title, said Ari Laura Kreith, who conceived and is directing the show.

For Kreith and other members of the company, “The Church of Why Not” is reflective of the diversity found within the congregation and among the people who come to the building for a wide range of worship opportunities, activities and social programs.

The church “really felt like a place where a lot of the issues we had been exploring manifested in a totally different context,” she said.

And for Karpen, the focus of Theatre 167 on diversity as a theme in its productions made it a natural to take up residence in the church’s West End Theatre. “We were looking … for another partner whose work we admired and we felt would be in keeping with the values of the church,” he said. “They seemed to be the right fit.” 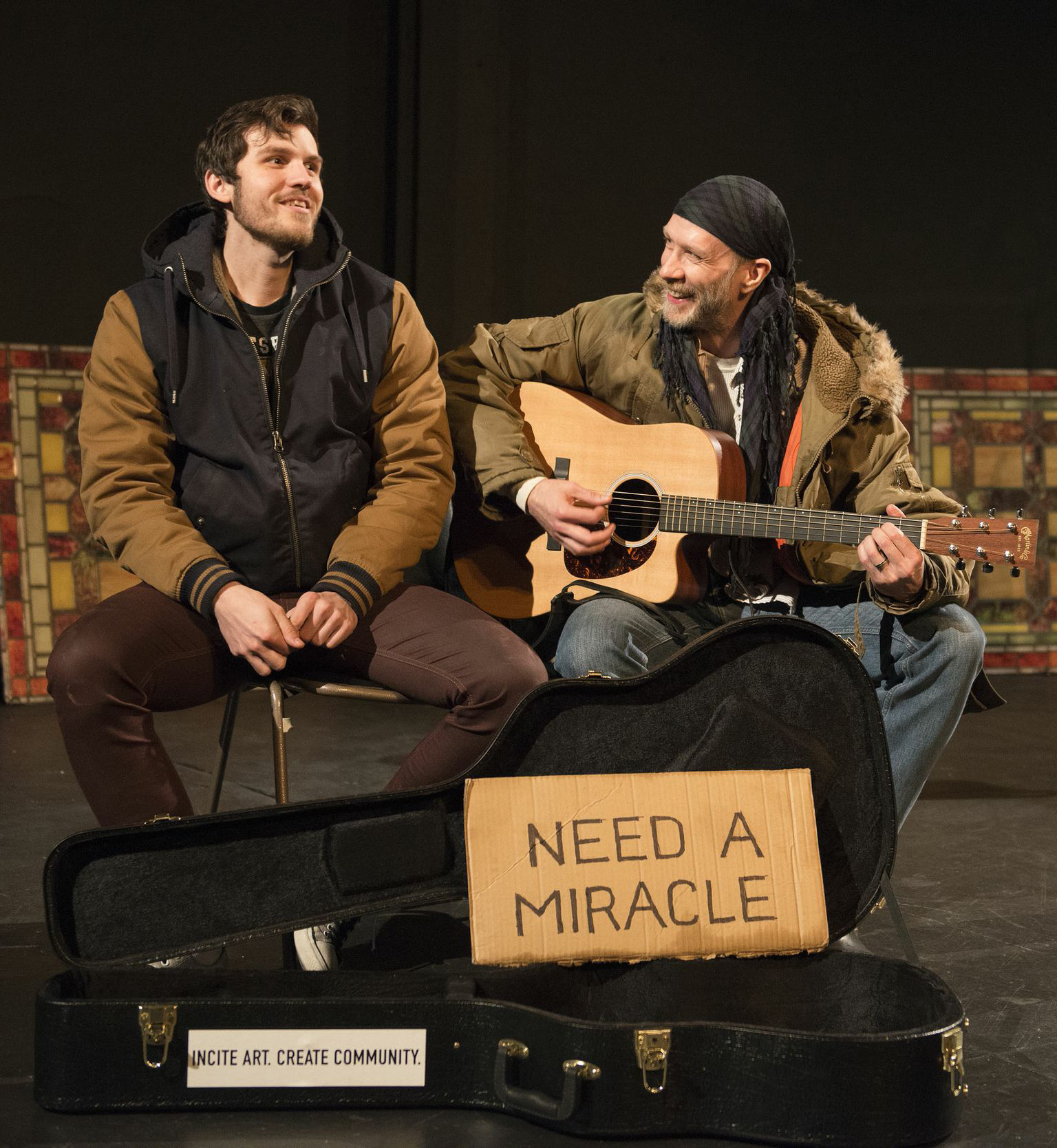 The character of Paul, played by Trevor St. John-Gilbert, is getting something to eat the church’s food pantry when he meets Saul, played by J.Stephen Brantley. Saul came to New York with dreams of a career in music but has fallen on hard times. Photo by Joel Weber.

Connecting with the church

Jenny Lyn Bader, along with Camilo Andres Almonacid and J. Stephen Brantle, wrote the “Church of Why Not.” She knew the building at the corner of West 86 Street and West End Avenue as a performance space, home to a food coop, a New York election poll spot and occasional site of services held by the nearby Congregation B’nai Jeshurun.

But she said she had no idea of “the depth and range” of daily activities at the Church of St. Paul and St. Andrew until they got involved in the project. “I live a block away from the church,” added Bader, who is Jewish, “and I didn’t know half the stuff that was happening there.”

Everyone involved in the play has attended worship services at St. Paul and St. Andrew. The playwrights and actors also came to know their subject matter as volunteers – tutoring students, assisting with the food pantry, doing meal preparation.

“It’s impossible to build a play like this without having personal experiences,” explained Kreith, who has a Jewish background and has attended services of other faiths but finds theater work to be “the deepest way I express my own spiritual truth.”

“Everybody’s been really welcoming,” she said. “If anything, it just gives us a deeper sense of wanting to do justice to the community.”

In the company’s style of collective authorship, “a writer will start a thread,” she said, and often one thread will become interwoven with another. Gradually, “it becomes one story with many different voices and perspectives.”

Bader finds that writing with several people can have advantages. “It gives you permission and liberty to get outside of your comfort zone and write characters that typically you might not feel authorized to write,” she said.

Theatre 167 started performing in Jackson Heights, Queens, about five years ago and is named for the number of languages spoken in a 20-block area of that neighborhood. It is best known for “The Jackson Heights Trilogy,” a six-hour production showcasing that diversity, but has produced other plays, including “Pirira,” by Brantley, which transferred to the West End Theater in the fall of 2013.

On this show, Brantley is both a writer and an actor and appreciates the ability to do both. “A lot of us are wearing multiple hats,” he said about Theatre 167, “which makes it very much a family and a shared effort.”

Brantley, whose East Texas family belonged to the Church of Christ, had not visited the Church of St. Paul and St. Andrew previously, but was familiar with the denomination.

As a high school student, he attended Christ United Methodist Church in Plano, Texas. “Like one of the characters in our show, I did a tour of `Joseph and the Amazing Technicolor Dreamcoat’ with that church,” he pointed out.

Because of that, being at the Church of St. Paul and St. Andrew “feels very much like a homecoming,” he said.

Bloom is a United Methodist News Service multimedia reporter based in New York. She also is a member of the Church of St. Paul and St. Andrew. Follow her at https://twitter.com/umcscribe or contact her at (646) 369-3759 or [email protected]