Update: Since this story ran in February 2011, three United Methodist conferences have raised $929,567.58 toward the goal of $1.6 million to buy a refurbished Cessna Caravan for Congo. The West Ohio Conference Wings Campaign has raised more than $700,000 and is planning two more fundraising events this year. Congo has raised $12,500 toward its goal of $25,000 from members of the conference. The Greater New Jersey Annual Conference raised $192,000 at their annual conference session for Wings of the Morning. Watch the fundraising frenzy that took place.

Tucked into a corner of the Lubumbashi International Airport, among the decaying relics of military planes and abandoned freighters, is The United Methodist Church's hangar.

In a country with few roads and very little infrastructure, the small, white, metal warehouse emblazoned with the church's signature red Cross and Flame is a remarkable sight.

On this Sunday afternoon, one of the tiny planes in the hangar has a pair of human legs protruding from its side. Gaston Ntambo has folded his tall frame under the control panel and, with a flashlight in his mouth, is installing a long-awaited repaired part.

This repaired part came from the suitcase of a visiting United Methodist. Ntambo often sends broken plane parts to the United States through the channel of brothers and sisters in the denomination. For a ministry operating on a shoestring budget, this cost-saving blessing keeps Wings of the Morning in operation.

A United Methodist missionary, Ntambo is the pilot for Wings of the Morning, an aviation ministry supported by the church. Founded in 1960, the ministry is often the one hope the sick, wounded and dying in remote areas of the country have for reaching lifesaving medical treatment.

On this Sunday afternoon, he is installing an engine monitor. The instrument monitors the health of his Cessna's single engine. It is critical for Ntambo to know what is happening with the engine, and he has been flying without that assurance over miles of desolate countryside.

That's just one of the examples of how different flying is for Ntambo compared to other pilots.

He lands on short, remote airstrips that are little more than grassy trails between trees. No lights. No control tower. He often must make a pass over the landing strip to clear it of animals and people from nearby villages.

But that's OK. Ntambo is used to putting his life in God's hands.

For the last 14 years, he has flown accident-free while war raged in his home country. The violence has left close to 4 million people dead from starvation or disease in the remote areas where Ntambo regularly goes.

"God has really been on our side," says the modest, soft-spoken man.

"Most of the time the region that I fly is about the size of Texas with a population of over 6 million people and no roads. Very difficult to move from point A to point B — it's almost impossible," he says.

The danger and hardships through which he travels are all worth that one moment when he knows he got someone to a doctor in time. 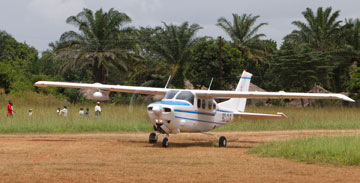 Gaston Ntambo taxis the Wings of the Morning plane off the dirt runway in Kamina. A UMNS photo by Mike DuBose.

"The best part of my life is when I'm coming down with a patient and I'm close to landing to where I know they'll get help and they're still alive. That in itself is priceless."

Ntambo is one of eight children raised by Bishop Ntambo Nkulu Ntanda and Nshimba Nkulu. During his childhood, his father supported the family on a pastor's small salary. Today, Ntambo's father is bishop of the North Katanga Conference.

The faith he learned from his parents and United Methodist missionaries working in the conference kept Ntambo's heart open for whatever God had in store.

The West Ohio Annual (regional) Conference — especially Epworth United Methodist Church in Toledo — took an interest in him. They gave him the encouragement and funds to travel to the U.S. and attend Davis College in Toledo.

He was in school to earn a degree in accounting. But Davis College had another degree program that captured his imagination - a flight school.

"I didn't learn about the flight school until I was in accounting for about a year," he said. He noticed a group of young men wearing leather jackets and sunglasses. They piqued his interest, and soon he was hanging out with the men, watching what they did.

The United Methodist Cross and Flame marks the Wings of the Morning hangar at Lubumbashi International Airport. A UMNS photo by Mike DuBose.

"The church people could never find me. I was always going to the airport to see (planes) take off and land. It became a hobby."

But he never considered flight school a possibility. "My father was making $10 a month as a pastor, and flight school was $75 an hour. There was no way I could ever dream of affording that. But God had a different plan for me."

Members of Epworth noticed Ntambo's passion and arranged for him to enroll in the flight school.

When they told him, he said, "I thought it was a dream, but the next morning I was enrolled. When you think about the odds of me coming back (to Congo) as a pilot, it is unbelievable. The church put me there."

Another dream that came true for Ntambo was meeting his true love when he returned to Kamina in 1989. A beautiful young woman was visiting her sister, waiting to enroll in school. Her room was on the second floor across from Ntambo's building.

"At night I could see her. I went to investigate." Soon after, he married Jeanne Kabove.

He told her when they started a family she needed to first have twins, a boy and a girl, so he could honor the married doctors who paid for his education.

For the last 50 years, United Methodist airplanes have been flying in Africa saving lives and spreading the gospel. It may be the best story no one knows about.

United Methodist Aviation Ministries is a program of the United Methodist Committee on Relief. Currently the program supports one pilot in each of three Democratic Republic of the Congo conferences: North Katanga, Central Congo and Southern Congo.

"Probably the singular most daunting challenge facing the programs today is a fuel crisis that threatens their continued existence," Quigg said, writing for The United Methodist Flyer, a newsletter launched in January to spread the word about this ministry.

Find out more about the program, including how to develop a covenant relationship with one of the pilots.

"We started praying for twins when we were engaged," she says.

"I thought the best way to thank this family was to name our children after them. To do that correctly, we had to have a boy and a girl, so we told God this was exactly what we wanted, nothing else. We placed our order ahead of time - three years before," her husband says, laughing.

Even though he has great faith in God, it was still shocking when Jeanne told him she was pregnant with twins.

Jeanne, also a United Methodist missionary, serves as radio operator for Wings of the Morning.

"When he is flying, I have to be on the ground &ellipsis to take his position and to call ahead to where he is going. You can't use cell phones; it is my job to make sure everything is fine where he is going," she says.

Often, Jeanne calls people along Ntambo's route. She asks them to go outside and listen. This is how she monitors where he is. She also calls ahead of his route to check on the weather and warn him of thunderstorms or other hazards.

With no air-traffic controllers, radar or weather-reporting stations, her role is crucial to the program.

"Through God's power, I have had the experience of saving pilot's and passenger's lives," she says.