A faithful and committed United Methodist who was one of the last surviving inmates of the infamous Auschwitz-Birkenau Nazi concentration camp died on Dec. 19, 2017, in Warsaw, Poland. Jadwiga Bogucka-Regulska was 92. 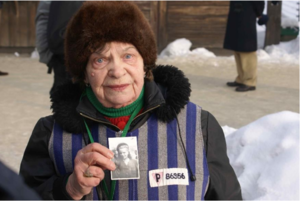 The Rev. Andrzej Malicki, superintendent of The United Methodist Church in Poland, and the Rev. Zbigniew Kaminski, led the memorial service for Bogucka-Regulska. The service was attended by many who wanted to say farewell to a woman who even in inconceivable times held fast to God and put her trust in God, the conference reported.

Malicki described her as “an example of pure Christian love.”

An estimated 1.1 million people were killed in gas chambers or by systematic starvation, forced labor, disease, or medical experiments at the camp. About 200,000 camp inmates survived.

She was liberated by the Red Army on Jan. 27, 1945. In 2005, the United Nations General Assembly designated Jan. 27 as International Holocaust Remembrance Day.

“She was always ready and willing to share her life stories,” Malicki said. “She never held anger against the Nazis and she forgave them all of those things they did.”

One of her favorite verses that also expressed her faith is Psalm 62, which was used in her obituary: “Truly my soul finds rest in God; my salvation comes from him.”

“Her witness touched and encouraged many people from different generations — far beyond her familiar and congregational surroundings,” Malicki said.

The drafters of the Christmas Covenant are leading webinars in the Philippines, Africa and Europe about their proposal for changing the denomination’s global structure.
Mission and Ministry

Though COVID-19 changed the lives of many, leaders of a United Methodist diaconal facility in North Macedonia, have been able to provide care without interruption.