From the cradle to the grave, if you are African-American or any other racial minority, you are less likely to live a long, healthy life.

According to the Centers for Disease Control and Prevention, the burden of death and illness is carried most heavily by African-Americans, Hispanics, American Indians and Alaska Natives, and Native Hawaiian and other Pacific Islanders, among the U.S. population as a whole.

But, it is not just race that determines health disparities, points out Dr. Wayne J. Riley, president and CEO of Meharry Medical College School of Dentistry in Nashville, Tenn. Geography, income, education, access to hospitals, doctors and health insurance are all factors.

"The major cities of the United States have great health-care assets, but there are pockets of health disparities in every one of those communities," he said.

Meharry, a United Methodist-related medical, dental and research university, is the nation's largest private, independent, historically black academic health center. The college is dedicated to educating minority and other health professionals and to researching the causes of health disparities.

"Meharry is a private institution with a very public mission," Riley said. "Most academic medical centers derive a lot of money from their private practice. We provide about $26 million of medical care that we never get a nickel for; we were never designed to be a big juggernaut clinical enterprise."

A place at the table

In 2011, Riley was named chair of the National Advisory Council on Minority Health and Health Disparities of the National Institutes of Health. The 13-member federal advisory council is appointed by the secretary of the U.S. Health and Human Services Department and helps set the federal agenda for health-care disparities research for the nation. In addition, he serves on a number of prominent national boards and committees, including the Society of Medical Administrators.

Riley points out health inequities have cost the nation more than $1 trillion. In 2009, a study commissioned by the Joint Center for Political and Economic Studies found "more than 30 percent of direct medical costs faced by African-Americans, Hispanics, and Asian Americans were excess costs due to health inequities - more than $230 billion over a four-year period. And when you add the indirect costs of these inequities over the same period, the tab comes to $1.24 trillion."

African-American women have the highest levels of breast cancer and the cancer is more aggressive and less responsive to standard therapies, Riley said. They also tend not to be diagnosed until later stages. 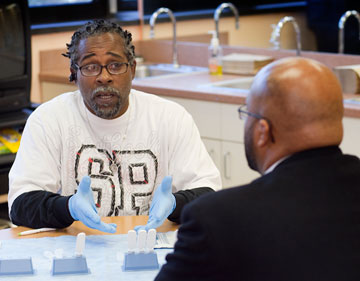 "We know that it is an access issue but there is some molecular cell, biologic reason why these cancers are more aggressive in African-American women," he said.

Native Americans have the highest rates of diabetes. Prostate cancer rates in African-American males are the highest in the world.

There is also data that suggests African-Americans don't get the same quality of care after a heart attack, Riley said.

"It's even being studied in the Veteran Affairs system: Black veterans don't get the same level of care that white veterans do. There's no economic issue there because everybody who's a veteran gets care." That's where the issue of culturally-competent care comes in, he added.

The latest data from the Census Bureau projects that by 2042 half of the people living in the United States will be people of color.

"We have to train a workforce that's going to be able to negotiate that very different demographic reality," he said.

He said that in trainingpeople to be more culturally competent, they need to understand that sometimes patients have an approach avoidance.

"It doesn't matter I'm a black physician. They may not have comfort with any physician," he said."So again, that's teaching our folks that...don't think just because you happen to be an African-American or a Hispanic physician, that your patients are gonna warm up to you just because of that."

"Since 1876, we have been training folks to go back to communities that people generally don't want to go back to serve," he said. "That meets a critical need for the nation."

At the most recent Match Day - the day when students are matched with the medical facilities where they will complete their residencies - more than half of Meharry's students went into primary care specialties. "If you throw in OB-GYN as primary care, it is 60 percent. I think that highlights the fact that we embrace from day one that primary care is a great way for you to serve."

Meharry graduates are in 49 states; South Dakota is the only state without a Meharry graduate. The loyalty of those graduates to Meharry extends well past their graduation date, Riley said.

That frontline view of disparities - reflected back to the school from Meharry-trained doctors - translates into how the school develops research. 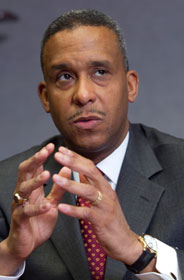 Riley came to Meharry in 2007 well aware of the university's many "near-death experiences" in its 135-year history. The 1970s and '80s were difficult, but during the last decade the college has turned the corner on some of its financial challenges.

"We have the second-highest endowment in town, $106 million. Most people are very surprised to hear that. Obviously, we're way behind Vanderbilt, but so is everybody else. For a historically black college or university to pass the $100 million mark is significant."

Riley is proud of the fact that for all four years of his presidency Meharry has had surplus budgets, no one was laid off, and no salaries were reduced. Several construction projects are under way on the campus, including a $1.6 million Alumni Hall that was started in November 2011.

"I believe very firmly that we have to be good stewards of every dollar that we get - whether it's from The United Methodist Church or from NIH (National Institutes of Health) or from the Robert Wood Johnson Foundation or from the State of Tennessee - to provide indigent care. My philosophy is we're going to always return as much value to the folks that give us the money as we can."

Another way Meharry stands out from other medical schools is its long, rich history with The United Methodist Church.

Meharry was founded on the kindness a black family extended to young Samuel Meharry in a time of need. The salt wagon legacy is told to every student and potential student who comes to the school.

In 1876, the Meharry brothers returned that kindness by funding the Central Tennessee college's emerging medical education department. That department became Meharry Medical College. "We were birthed and nurtured along by folks who had very strong connections to The United Methodist Church. The first classes were held in the basement of Clark Memorial United Methodist Church," Riley said.

"We have people of all faiths here and we embrace all faiths. But we are very proud of our United Methodist roots."

Meharry is one of the 11 historically black colleges supported by the denomination's Black College Fund. The college receives funding from the United Methodist Board of Higher Education and Ministry for scholarships and unrestricted funding that can be used in the best way to help Meharry.

"Our students are very embracing of the comfort of being spiritual here. And I think that again is part of the Meharry DNA."

Riley makes sure all Meharry students understand those initials M.D. that will come after their names someday mean more than "medical doctor." They carry with them the responsibility to make a difference.

"To whom much is given, much is required. And we've been given a lot and we need to require a lot. My job as president is to make sure that people understand that and understand what a privilege it is to be here because it truly is."