The Rev. DooSoo Lee’s latest pastoral appointment has taken him to his motherland.

Lee, a Korean-American U.S. Army chaplain, currently serves and cares for soldiers at U.S. Army Garrison Humphreys — located in Pyeongtaek, along the western coast of South Korea, not far from Seoul.

Lee is a full elder in the Northern Illinois Conference, but after serving several local churches, he became a chaplain to the Selected U.S. Army Reserve in 2017. He has been an active-duty chaplain since 2018.

“Deployment to Korea is different from serving assignment to a military unit in the Korean garrison,” he said. “It is similar to the difference between an interim pastor and an appointed pastor.

“It is a very special experience to be deployed to serve America in my motherland, where I was born and raised, as a chaplain of the U.S. Army.”

Living in a U.S. garrison in Korea is different from living on a military base in the U.S. Short-term deployment is used to simulate an actual battlefield. Soldiers cannot be accompanied by family, unless there is a special reason during deployment. They cannot have their own vehicle and must carry out intensive tasks and missions in a short period of time.

On top of coping with deployment away from home, Lee’s brigade had to overcome the difficulties of the COVID-19 crisis while settling in at Humphreys in October 2020. Now, he has finished about half of his deployment.

His mission began with helping improve communications between the U.S. and South Korean armies. Ministering to the issues of several hundred to even 1,000 young soldiers in a foreign country makes his presence crucial.

“It is necessary to learn to address a group life that deals with weapons, a separation from family members and the beliefs of the community,” he said. “The greatest mission of a chaplain, regardless of race and nationality, is to soothe the souls of young soldiers who are tired of the experiences of being forcibly deprived of their individuality.”

He is concerned that the short-term missions young soldiers are required to complete wear them out spiritually and physically. At times, the stress level is quite intense, he said. Because of the nature of military training, they have to keep moving and working — even when they desire rest.

“The primary role of a chaplain is ‘caring for the people of God and sharing the Word’ like a pastor at a local church,” Lee said. He practices his chaplaincy based on the experience and knowledge he gained while serving a local church.

However, an Army chaplain must undertake some unique tasks.

“An Army chaplain is to practice the ministry of presence, which I did not experience in a local church,” he said. “When there is no training, I meet soldiers for pastoral counseling, and when there is any training, I am there with the soldiers in the training field.

“One of the main missions of chaplains is to ‘Be there,’ to be a comforting presence for soldiers in a tough and dry military life. And that is the ministry of presence.”

Another distinctive aspect of Lee’s ministry is serving soldiers of diverse races, religions and cultural backgrounds, which he considers a blessing and reward.

“Christians who are regular churchgoers make up less than 10% of the total soldiers in the battalion,” he said. “As a servant and ambassador of Christ, I am sent to serve people of various religions and even atheists.”

A Muslim soldier once came to Lee to obtain the official approval document for permission not to shave his beard, and another asked for his help in getting permission to wear a hijab with her uniform. A Buddhist soldier came to his office to find a place to pray. Sometimes even non-religious soldiers requested biblical passages for comfort during hard training.

“The greatest advantage and beauty of being a chaplain is that it is possible to minister without discrimination, to reach out beyond the usual relationship that pastors inevitably have,” Lee said. 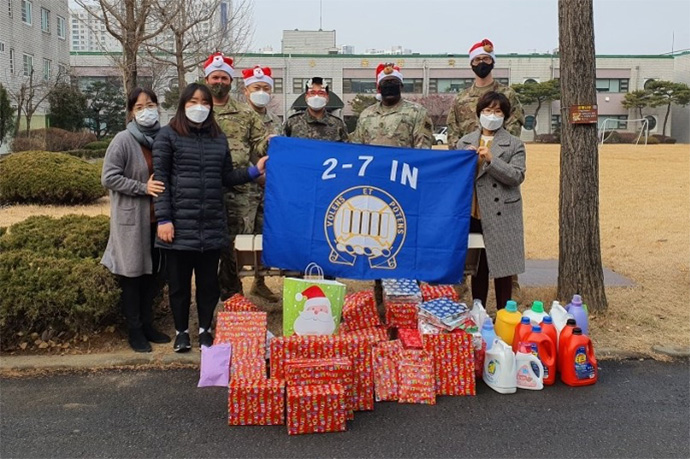 Comforting and caring for soldiers is one of the chaplain's primary duties.

Lee said the winter holiday season was “very difficult mentally for the soldiers who were separated from their families. And chaplains are very sensitive to care for the health of their spirits and minds.”

In addition to his pastoral ministry, Lee feels proud as a Korean-American soldier to do special ministry such as interpretation, and leading Korean cultural awareness training to help U.S. soldiers perform their duties appropriately and smoothly.

In the midst of the busy schedule of continuing military training, Lee and battalion commander Lt. Col. Christian Durham planned and conducted cultural awareness training every other week, hoping that young soldiers could experience and learn about Korean culture and history.

These programs were placed on hiatus because of COVID-19, but Lee plans on resuming them when the level of quarantine is lowered.

Another important ministry for a chaplain is the Good Neighbor Program. It is designed to build and develop friendship and trust between the U.S. and Korean armies, and between the U.S. Army and various Korean communities and organizations.

For example, in December, there was an Angel Tree at the headquarters of the battalion under the leadership of the chaplain. The tree was used as a spot for soldiers on base to donate Christmas gifts to a local orphanage. Three days after installing the tree and hanging angels, which have the age and gender of the children of the orphanage, all the angels were taken. A number of soldiers visited the orphanage with gifts carried in their military rucksacks.

“Unfortunately, because of COVID-19, the soldiers did not have the opportunity to spend time in person with the children,” Lee said, “but it was a blessing to have such an opportunity to serve a nearby community.”

While being deployed to South Korea, Lee stays close to other Korean-American chaplains and the group comforts each other, sharing the experience of being a visitor in their native country. He says it is a very odd feeling.

Modern technology affects the deployed soldiers’ personal and family life. Communication apps such as KakaoTalk, WhatsApp, FaceTime or Zoom are very helpful for them to stay in contact and communicate with their families.

However, virtual contact cannot replace hugs or other physical contact, and the soldiers still feel emptiness and loneliness away from home.

Since the number of United Methodist chaplains is remarkably small, Lee wants to encourage fellow clergy to try ministry beyond a local church and recommends that more clergy consider chaplaincy.

“Pastoral ministry as a chaplain here is truly dynamic and pure,” he said, “not only because of the work that cannot be done without chaplains, but also because there are new ministries that can be done by chaplains.”

The event brought together nearly 200 members for the ordination of new leaders, lectures, worship and other celebrations.
Young People

Instead of relying on a pastor to oversee its young adult ministry, First Korean United Methodist Church in Wheeling, Illinois, entrusted it to a devoted and committed volunteer layperson with a calling and vision.