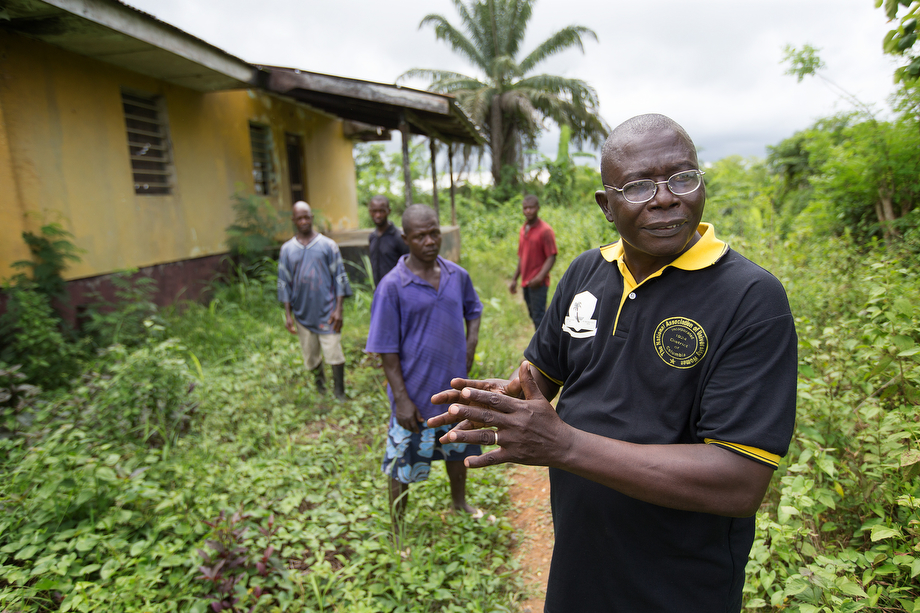 The Rev. Joseph Theoway (front) describes his vision for the restoration of the Liberian Annual Conference’s agricultural center in White Plains, which was destroyed during the country's civil war. Theoway is flanked by caretakers who are maintaining what is left of the facility. Photo by Mike DuBose, UMNS.

The Liberia Conference’s agricultural center in White Plains doesn’t look like much. About an hour outside Monrovia, hundreds of acres of overgrown land surround buildings in various stages of ruin — roofs missing, walls caving in. But the Rev. Joseph Theoway doesn’t see what’s there now; he sees what will be there.

“Our vision is that by 2029 we’ll have an agriculture program that will surpass pre-civil war levels, that will be instrumental in generating income and empowering the conference as a whole,” said the director of the conference’s United Methodist Rural and Agricultural Development Program.

Theoway remembers when these buildings were in good shape and fully functioning. He managed this facility during his first stint directing the conference’s agricultural ministry. Two civil wars that raged through Liberia from 1989-2003 destroyed the facility and much of the country’s infrastructure. 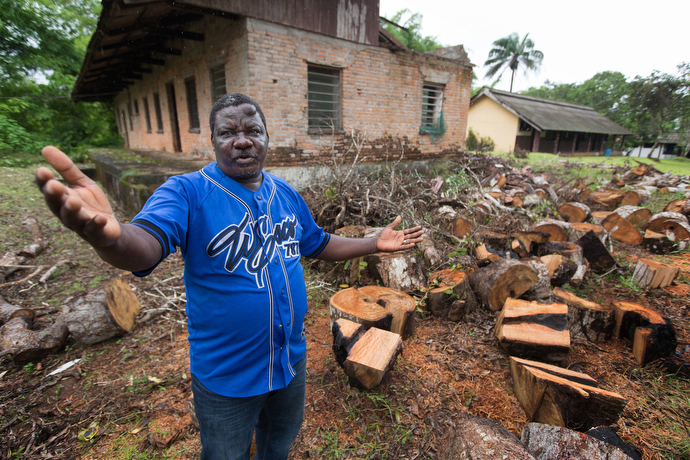 Napoleon Nyema tells of efforts to maintain what remains of the Liberian Annual Conference’s agricultural center in White Plains, which was destroyed during the country's civil war. Nyema is a caretaker on the property which The United Methodist Church hopes to restore to productive use. Photo by Mike DuBose, UMNS.

“We were stripped of our logistics, we lost vehicles,” Theoway said. “After the war, not much has been done in terms of rehabilitation because of financial resources.”

The war forced Theoway to flee with his family to Ghana. He returned to his post last year at the request of newly elected Liberian Bishop Samuel J. Quire Jr.

Quire emphasizes the need for the Liberian church to be more self-sufficient and to help supplement pastors’ salaries. Quire also believes rural development and increased agricultural production is a key way to make that happen. 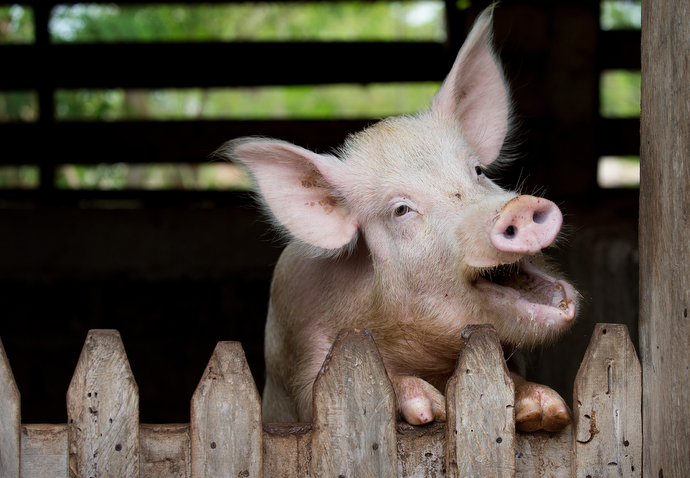 A pig looks out over the top of its enclosure during mealtime at the United Methodist Ganta Mission Station in Ganta, Liberia. The pigs are sold for meat, and as breeder stock for churches looking to start their own pig-raising endeavors. Photo by Mike DuBose, UMNS.

Theoway said there are two major components to the conference program: Developing agriculture for commercial farming to generate income for the support of pastors and the conference, and outreach to congregations, districts and farmers through training in farming methodology.

“Agriculture is life,” he said. “As the arm of the annual conference, we have to feed and empower people to feed themselves. We have the resources around us; all we have to do is commit ourselves.”

Though much of Liberia’s population farms, the country still imports half of its staple food requirements, according to USAID. Many farmers lack knowledge of the most beneficial farming techniques, such as crop rotation or water and soil management. Compounding the problem, only about 6 percent of Liberia’s roads are paved, and unpaved roads frequently wash out during the May-November rainy season. That limits farmers’ ability to transport produce to more valuable markets. 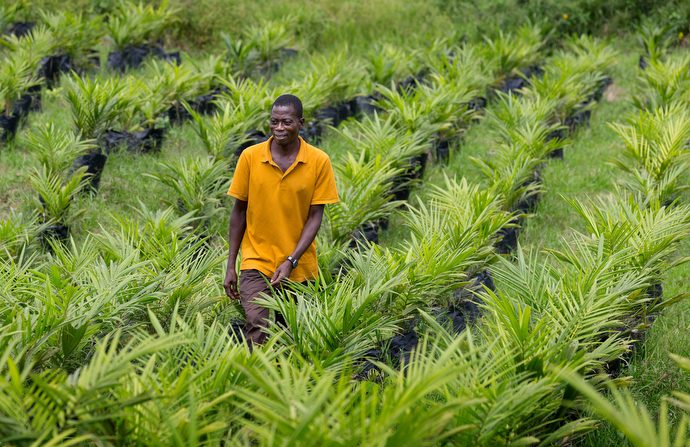 Peter Gomah checks on the health of seedlings in the oil palm nursery at the United Methodist Ganta Mission Station in Ganta, Liberia. “Palm is a great crop because nothing goes to waste,” Gomah said. “The nuts are roasted and pressed for oil. The leftover chaff is used as feed, burned to boil the oil for cooking or mixed with manure to fertilize crops.” Photo by Mike DuBose, UMNS.

White Plains is one of five agriculture centers throughout the country that the conference oversees. There are other centers in DeCoursey, Gbason-town, Gbarnga and Ganta. Another plot of 400 acres was purchased in Nimba County years ago, but no clearing or development has begun there.

Once the White Plains center is up and running, there will be poultry barns, a hatchery, a piggery, and goats and sheep. The rest of the land will be dedicated to raising palm trees and vegetables. Theoway has plans for rubber trees, cocoa and coffee at some of the other centers, and Gbarnga has fish ponds. Beekeeping and honey production is another focus. Before the war, Theoway said the church was one of the country’s main suppliers of protein, and he wants to get back to that level of feeding Liberia. 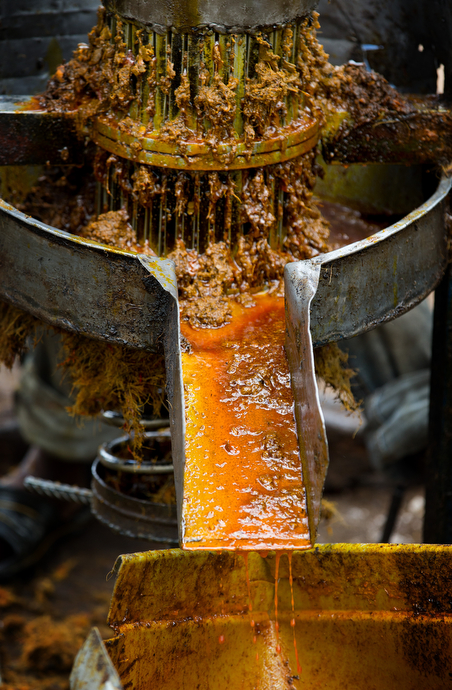 Watch video of the Rev. Joe Gatei who learned beekeeping to supplement his income through training from the United Methodist Committee on Relief.

Standing on a hillside overlooking hundreds of acres of fields, Theoway said, “We’ll have cabbage, collard greens, other vegetables. Market women will come here to buy vegetables to carry to Monrovia.”

Two hundred miles away in Ganta, the agriculture program is further along. At the church’s mission station in the village on the Guinea border, two buildings housing pigs are full of squeals as mealtime approaches. The pigs are raised to sell for meat, but also to churches looking to start their own pig-raising endeavors.

Across the property, a large field of palm plants sways in the sun. Palm is a major crop in Liberia that takes very little maintenance to raise. Selling palm oil is a big source of income for the mission station, and they also provide palm plants and seedlings to the local community.

“We send these to any farmer or church the bishop wants,” said the Rev. Priscilla Jaiah, mission station superintendent.

The station hosts workshops for those who’ve received the palm seedlings and for other local farmers, so they can learn the process of growing and harvesting the palms, and other methods like crop rotation.

The station also generates income by pressing palm oil for local growers. Currently, all the oil is pressed by workers turning the mill. Peter Gomah, who supervises the agriculture program in Ganta, said he hopes to get a motorized press to increase production.

“Palm is a great crop because nothing goes to waste,” Gomah said. “The nuts are roasted and pressed for oil. The leftover chaff is used as feed, burned to boil the oil for cooking or mixed with manure to fertilize crops.”

In a dense forest outside Ganta, an hour down a washed-out dirt road full of ruts, the Rev. Joe Gatei’s ministry is buzzing. Literally.

Gatei oversees 200 beehives he uses for income. A graduate of the United Methodist Committee on Relief’s Sustainable Agriculture and Development Program, Gatei now trains others in the art of beekeeping. 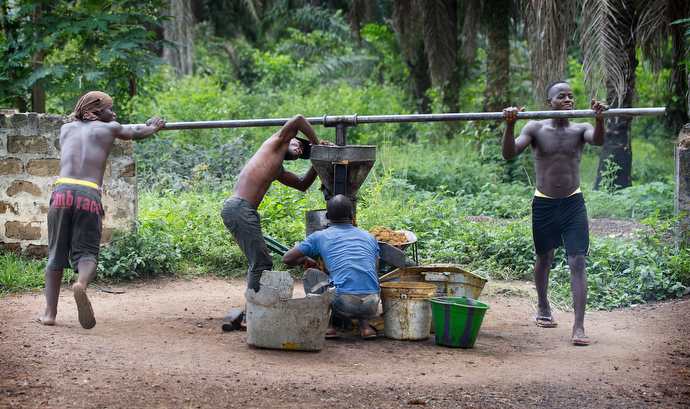 Workers press palm oil by hand at the United Methodist Ganta Mission Station in Ganta, Liberia. Selling palm oil is a big source of income for the mission station, and they also provide palm plants and seedlings to the local community. Photo by Mike DuBose, UMNS.

Gatei is the perfect example of why Bishop Quire looks to commercial agriculture to help supplement pastors’ salaries. Gatei is currently at a “preaching point” — a designated spot where people meet for worship. No building. He gets no salary. They want to build a church, and he got some of the farmers involved in beekeeping. Now, when the honey is sold, the farmer keeps one-third, the church keeps one-third and one-third goes back to Gatei.

“The people have no money to pay us so that’s the idea I employed at my church,” he said. “I tell all the superintendents that if we provide each church with hives, they will be able to help their district.”

Theoway said the Liberian church is one of the pioneers of introducing beekeeping in the country, and “we want to extend it so pastors can be in their community and do it.” At the last annual conference, they sold honey from the bees. 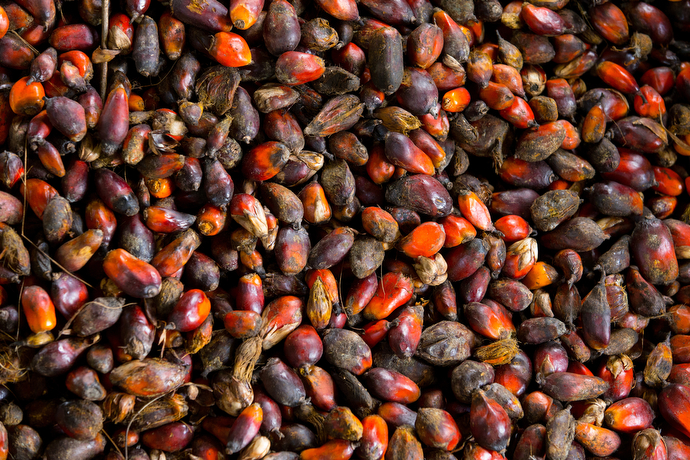 For the next six months, Theoway’s focus is on raising capital for necessary repairs and construction, worker salaries (his staff is entirely volunteer for now) and for office needs like computers. He said the total estimated budget is $750,000, but that budget is broken into smaller components so they can work bit by bit as funds are raised. Theoway is completing the paperwork to reinstate the program as an Advance project and expects to have a designated Advance number this fall.

“The bishop has made this his priority vision, so we have to do everything to bring it to reality,” he said. “By the next quadrennium or so, our impact will be so great that even the international community will see what we’re doing.” 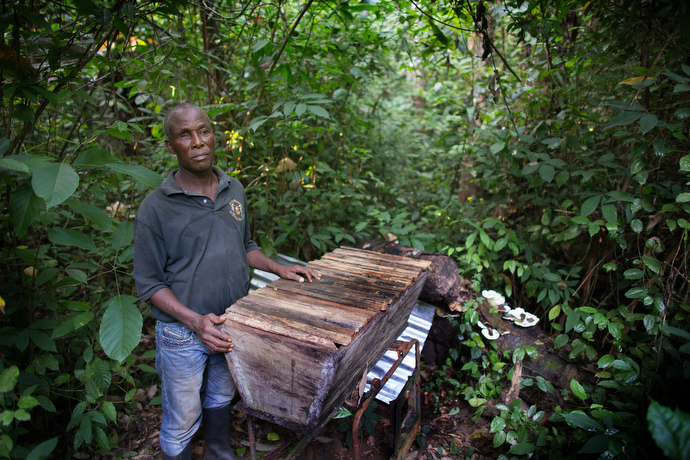 The Rev. Joe Gatei displays one of the beehives he keeps near Ganta, Liberia, to supplement his income as a pastor. Photo by Mike DuBose, UMNS.

The Council of Churches in Sierra Leone urges government to reduce health risks to 150,000 to 200,000 people who live along rivers where diamond and gold mining occur.
Mission and Ministry

Migrants, natural disaster survivors and others around the globe can count on help from The United Methodist Church in 2022, after more than $10 million in grants were approved.