Without that, leaders of the United Methodist Board of Pension and Health Benefits warn, the future of church-sponsored health insurance could be in jeopardy.

That means — if the bill becomes law — clergy and lay church employees could qualify for the same federal financial help available in the marketplaces while remaining on their church plans.

Secondly, the bill would let local churches that contribute to their conference's health plan keep getting the small-business health care tax credit.

Under the current Patient Protection and Affordable Care Act, churches no longer can claim those credits, starting in 2014, because such credits only are available to employers who purchase "qualified health plans."

Church health plans, even if they meet all the law's other requirements, currently are not deemed "qualified" because they are not open to the general public.

Federal law prohibits church health plans from offering benefits to anyone other than church employees and their families. Denominations argue that they are different from big corporations such as Coca-Cola that have exclusive plans because they are a collection of small employers. The bill would allow churches to get the same benefits as other small businesses that shop in the marketplaces.

Finally, the bill clears up any ambiguity in the law that church health plans satisfy the individual and employer mandates - something only established in regulations at present.

Church and Society and health care

The United Methodist Board of Church and Society, the denomination's social advocacy agency, championed the passage of the Affordable Care Act.

In doing so, the Rev. Cynthia Abrams said, the agency was following the marching orders approved by General Conference, the denomination's top lawmaking body.

"Providing the care needed to maintain health, prevent disease, and restore health after injury or illness is a responsibility each person owes others and government owes to all, a responsibility government ignores at its peril," asserts the Book of Discipline, the denomination's law book.

The Book of Resolutions, which contains the denomination's statements on social issues, charges the Board of Church and Society "with primary responsibility for advocating health care for all in the United States Congress and for communicating this policy to United Methodists in the USA."

In advocating for the new law, Abrams said, her agency was looking at "the greater good" - what would increase access to health care for the greatest number of people. But with any large piece of legislation, she said, improvements will likely be necessary. For example, she said the benefits of Medicare have been expanded since it became law in 1965.

"I really think the Affordable Care Act will follow the same pattern," she said. "There will be fixes along the way. This (the Church Health Plan Act) is one."

All U.S. citizens must have health insurance or face a federal tax penalty starting next year. Employers with 50 or more employees also must provide insurance or pay a tax penalty, starting in 2015.

The bill has the backing of benefits organizations for the Southern Baptist Convention, the Episcopal Church, the Presbyterian Church (USA) as well as the Church Alliance, a coalition of chief executives of 38 church benefit programs. Barbara Boigegrain, top executive of the United Methodist Board of Pension and Health Benefits, is the Church Alliance's chair.

"We sincerely hope our legislators - Democrat and Republican alike - can work together to amend this health care coverage oversight and provide bipartisan support to give health care parity to over 1 million preachers, church lay workers and their families," Boigegrain said in a statement.

In The United Methodist Church, annual (regional) conferences have the primary responsibility for sponsoring or participating in a group health plan that covers full-time clergy and lay employees in the United States. Local churches generally contribute to the health benefits of their pastor and other workers through apportionment payments, direct bills or a combination of the two.

But if the proposed fix is not passed, "clergy and church lay employees could, over the next several years, lose the church plan coverage," said Andrew Hendren, associate general counsel at the United Methodist Board of Pension and Health Benefits. He is the agency's expert on the Affordable Care Act.

The problem is that the financial incentives in the Affordable Care Act for those who shop in the marketplaces could make conference-sponsored church health plans unsustainable, he said. The result would leave all church workers to rely on the new insurance marketplaces for coverage.

Benefits officers in many United Methodist conferences already are discussing the potential cost reductions of allowing local churches to send lower-paid clergy and lay employees to the marketplaces in coming years.

The Florida Conference has gone a step further. Starting in January, the conference plans to send lay employees at its local churches and extension ministries to the state's insurance marketplace, which the federal government will set up.

As required by the new law, conferences are sending letters to clergy and lay employees about the marketplaces' availability.

However, Hendren cautions that relying too heavily on the marketplaces has real drawbacks for conferences and church employees overall. 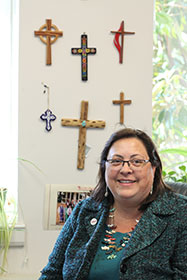 The Rev. Cynthia Abrams says the best thing United Methodists and others can do to support the Church Health Plan Act is call their Congressional representatives. A UMNS photo by Kathleen Barry.

The law requires employees to continue with their employer plan if the cost for their individual plan is less than 9.5 percent of household income. But if too many church employees turn to the marketplaces for coverage, conferences may have too small a pool to buy affordable insurance for those who remain on the church plan.

The Rev. Jackson Day, chair of the Board of Pensions and Health Benefits in the Baltimore-Washington Conference, puts it this way.

"In the whole health insurance field, it's actually been possible to get better rates if you tell the insurance company that all of your people will be included," said Day, who also is a consultant for health care advocacy with the United Methodist Board of Church and Society. "That means nobody will be gaming the system, with expensive, sick people coming and healthy people staying out. With a mandatory plan, everyone is involved . ... so our plan has been mandatory (for clergy). But our local churches' lay employees don't have to participate, and the exchanges may make better sense for them. We just don't know at this point."

For example, he said, conference plans frequently work to remove friction in the appointment system that the high cost of health benefits costs can cause. A conference plan may "blend rates," charging all churches the same whether the pastor is single, married or has children.

"In the world of individual coverage through the marketplaces, there will be no intermediate body to take these concerns into account," Hendren said.

The proposed Church Health Plan Act "ensures that church health plans remain viable insurance plans for clergy and church employees," Sen. Pryor said. "Under current law, next year, commercial insurance plans will be given a distinct marketplace advantage over health plans serving churches and the clergy. Congress shouldn't interfere in the marketplace. Our bill is about letting the market work."

What's known about the marketplaces

States are still just beginning to publicize premium rates in the new marketplaces. The federal government is establishing the marketplace in the 27 states that are not setting up their own. A main goal of the new exchanges is to create an insurance market where the insurers compete on price and quality, rather than by dodging risk.

While costs vary significantly depending on the customer's level of coverage, location and age, a Kaiser Family Foundation survey of 17 states and the District of Columbia has found the rates "generally lower" than projected by the Congressional Budget Office.

Individuals and families in the insurance marketplaces also can qualify for federal tax subsidies toward insurance if their household income is between 100 percent and 400 percent of the federal poverty line. That translates to annual income between $11,500 and $46,000 for an individual or between $23,500 and $94,000 for a family of four. Amounts designated for housing are not included in calculating income.

The federal government will send the subsidies directly to the insurer.

Enrolling in the new marketplaces will not be as easy as booking a flight online, but it doesn't involve the federal government poking around people's medical records either. The Associated Press likens the process to a combination of filing taxes and researching a big purchase.

To enroll, people will need to identify themselves and their family members and provide current information on income, employment and any available insurance options. They'll next learn how much financial help they are entitled to, and then shop for the best options to suit their needs.

The bill is before the U.S. Senate finance committee. So far, it has no Republican co-sponsors, and no version of the bill has been introduced in the U.S. House of Representatives. A majority in the now Republican-controlled House has voted 41 times for the full or partial repeal of the Affordable Care Act, according to the Hill newspaper. House Republicans on Sept. 20 passed a spending bill that stripped all funding for President Obama's health care law.

"Several Democratic senators have expressed an interest in co-sponsoring, but I think it's important to build bipartisan support," Pryor said. "That's why I've been working with my Republican counterparts to find a bipartisan compromise."

The Rev. Cynthia Abrams, who directs the health care advocacy program for the United Methodist Board of Church and Society, said the best thing United Methodists and others can do to support the bill is call their Congressional representatives.

She suggests conference and local church leaders explain to their Congress members "what kind of impact if the church health plans are not treated as 'qualified health plans.'"

However, in a YouTube video, the leader of GuideStone Financial Resources - which provides health benefits for the Southern Baptist Convention - also urged viewers to contact their senators, especially if they are Republicans, to request they back the bill.

"Our Republican friends who we've stood with on so many important social issues of our day feel that the only answer in fixing Obamacare is to repeal it," said the Rev. O.S. Hawkins, GuideStone's president and chief executive officer, in the video. "And while many people we serve would say an 'Amen' to that, whatever your view on the health care law, the reality is repeal isn't a feasible option in the near-term."

The United Methodist Board of Church and Society is working with United Methodist volunteers across the United States to help people without health insurance to enroll in the new marketplaces and gain access to health care.

"The Affordable Care Act is the law of the land," Pryor said. "We should work together to ensure our health system is affordable and accessible for all Americans."