Employees at United Methodist general agencies will see changes to their pay scales under policies the denomination’s finance agency board approved Nov. 17.

The General Council on Finance and Administration board unanimously voted for the new compensation structure over the expressed objections of three general secretaries — that is, agency top executives. Among those speaking out against the changes was the Rev. Kim Cape, speaking in her capacity as convener of the General Secretaries Table.

Agency executives worry about how the new pay ranges look to the wider church at a time the denomination’s future is uncertain and a task force is exploring whether church-giving levels are sustainable.

Cape, who also the leads the United Methodist Board of Higher Education and Ministry, said she fears the new pay structure makes agencies appear “out of touch.” 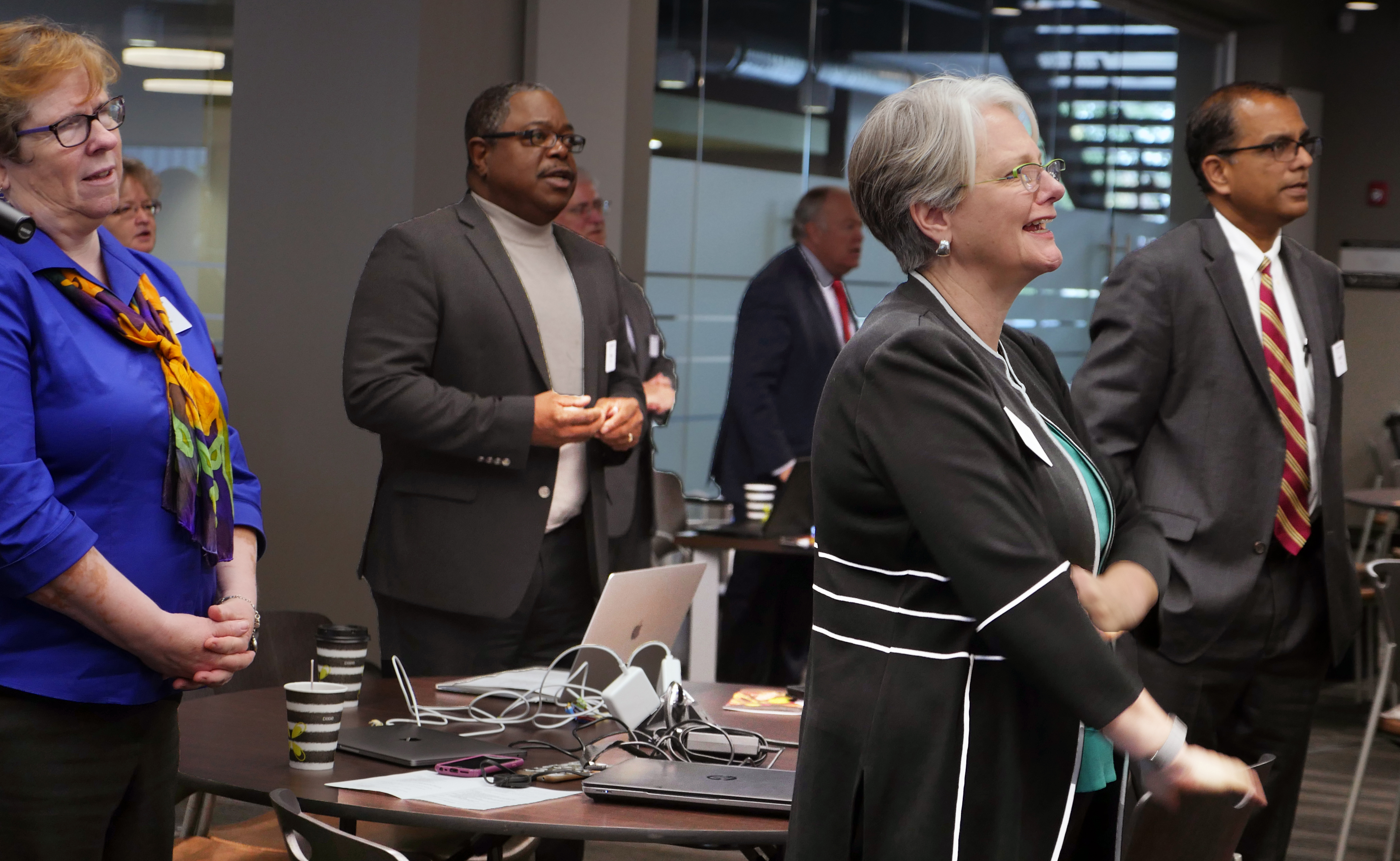 The Rev. Sandra Olewine, Reggie Clemons, Kathryn Croskery Jones and Vasanth Victor (from left) join in worship at the General Council on Finance and Administration board meeting in November in Nashville, Tenn. Photo by Heather Hahn, UMNS

The new structure has 24 pay grades. Under the new structure, the minimum and mid-range salaries will increase for various agency jobs. Currently, no agency staff are in the bottom pay grade. At the three uppermost pay grades, agency executives could make between $107,304 and $207,739.

Church offering pays for apportionments, but the new compensation plan will not change the amount requested from local churches. Any change to agency employee pay must come within the confines of the budget approved by the 2016 General Conference. Starting in January, agencies will have five years to implement the new structure — meaning it will not go into full effect until 2022.

The changes result from the recommendations of the Committee on Personnel, Policies and Practices, which includes finance agency board members as well as representatives from general agencies.

This marks the first time in 13 years the committee has recommended revising the agencies’ pay model. The committee developed the new structure after 18 months of study, including review of pay at other U.S.-based nonprofits and religious organizations. The committee also worked with human-resource staff across the agencies.

“We are trying to be good and faithful stewards of the apportionment dollars,” said Valarie Willis, committee chair and a lay member from the West Ohio Conference. “We also have to make sure we are making decisions based on research and verifiable market data.”

She described the current pay structure as out of alignment, with pay ranges that go too high and too low compared to the remuneration for similar positions at other nonprofits. Another problem with the current system, she said, is that you can have people doing similar jobs that fall across multiple pay ranges.

The new salary structure, she told the board, “will establish a salary that is appropriate and has appropriate pay equity.” It also includes guardrails to keep salaries in control, she said.

More than 80 percent of agency staff — 572 employees — are already making salaries within the new pay ranges assigned to their jobs.

Sixty-one employees are below the minimum. To bring those employees within range will cost $460,745 — or $92,149 annually over five years.

Another 54 employees are above the maximum for their respective pay ranges. To bring their compensation in line with the new structure, the committee recommends giving these employees any pay raise as a lump sum at the beginning of the year so it doesn’t become part of their base salary.

The General Council on Finance and Administration board:

The General Council on Finance and Administration's press release.

The new pay structure received pushback even before the presentation to the full finance agency board. In the personnel committee, voting “no” to the pay structure were representatives of the United Methodist Board of Global Ministries and the Commission on the Status and Role of Women.

“I just think it’s the wrong timing to bring it now,” Thomas Kemper, Global Ministries top executive, told the board. Overall, he said, the changes will mean a “considerable increase” in pay for general agency staff. He recommended revisiting the new pay model after the special General Conference in 2019.

Dawn Wiggins Hare, top executive of Status and Role of Women, said her agency works very hard to have its staff members at mid-point in their salary range but that won’t be the case under the new structure. Her agency has five full-time staff members and one who is three-quarter time.

“With the increased attention to sexual misconduct, our phones are ringing off the hook,” she said. “I don’t have resources to shift. I need to hire more folks.”

The Rev. Anthony Tang, a personnel committee member from the Desert Southwest Conference, said that the committee hopes to more frequently review agency compensation in light of market forces.

“My reflection is that with the phased-in process by 2022, that gives flexibility so that if there is a problem with potential pay raises, it would always be possible to freeze salaries,” he told the board.

Kenneth Ow, a finance agency board member from the Baltimore-Washington Conference, pointed out that there is no requirement for agencies to act right away on the new schedule.

“You could do nothing until 2022 and see the effect of the 2019 General Conference,” he said. “But I firmly believe we should get something that’s more up-to-date than 13 years on the books.”