Editor's note: This story has been updated to include a response from the Rev. William Koch, a retired district superintendent and police chaplain who now serves full-time with NOMADS mission volunteers. On Dec. 11, United Methodist Women also submitted a statement.

Elyse Ambrose Minson said she wants to have faith in the U.S. justice system — even when an unarmed African American dies at the hands of law enforcement.

“I want to believe something is going to happen that proves people of color have value to the United States and to its governing bodies,” said the member of Church of the Village, a multiethnic United Methodist congregation in New York City.

Lately, she said, that has been hard.

A New York grand jury decided not to bring charges in the death of Eric Garner, who died after a Staten Island police officer put him in a chokehold and officers compressed his chest. Police accused Garner of selling loose cigarettes in violation of local tax laws. A video captured the fatal encounter— as well as his final words, “I can’t breathe.”

The decision came a little more than a week after a grand jury ruled there was no criminal case in the death of Michael Brown in Ferguson, Missouri.

Ambrose Minson cried after the ruling in the Garner case, then decided to take action. On Dec. 4, she joined fellow church members and thousands of others at a largely peaceful demonstration that extended from lower Manhattan across the Brooklyn Bridge.

She is among the United Methodists across the United States who seek ways to bear witness that all lives matter.

Since last week’s ruling, church members have held prayer gatherings and joined in protests. Church leaders, including those at the United Methodist Board of Church and Society, also have made plans to advocate for long-term reforms aimed at serving both the police and the people they are called to protect.

Ambrose Minson, a Ph.D. student at Drew University Theological School, the United Methodist seminary in Madison, N.J., said the church needs to respond. While her faith in U.S. institutions is shaken, her faith remains strong in God and the church’s capacity to do God’s will.

“We are always in the process of working toward bringing God’s kingdom to the people of the earth — and that is confronting injustice in all its forms,” she said.

The Rev. Susan Henry-Crowe, the top executive at Church and Society, said she thinks “churches can make a huge difference in urging nonviolence and constructive ways forward.”

The recent grand jury rulings are just the latest events to grab headlines in a country where laws actively discriminated against African Americans within living memory and where black and whites still can have different experiences with law enforcement.

In November, a Cleveland police officer fatally shot 12-year-old Tamir Rice who was playing with a toy gun. That case is still being investigated, but the boy’s mother said she is seeking criminal charges. On Dec. 4, the U.S. Justice Department released a searing review of the Cleveland police department’s exercise of force and called for sweeping reforms. 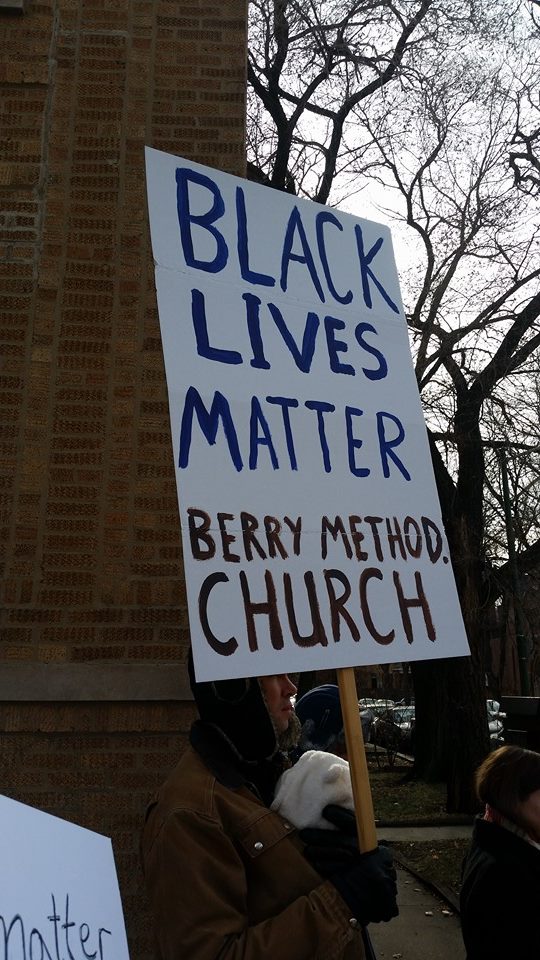 In September, another grand jury decided not to indict police officers in the shooting death of John Crawford III, who was holding an air rifle in a Beavercreek, Ohio, Walmart.

Still, there is no question police work is important but dangerous. According to the National Law Enforcement Officers Memorial Fund, 67 law enforcement officers were killed in the line of duty during the first half of 2014.

No reliable national data exists on deaths that result from law enforcement, but law enforcement agencies voluntarily report to the FBI about 400 justifiable homicides a year.

Need to reach out to law enforcement

The Rev. William Koch, a retired district superintendent who for years was a chaplain to the Missouri State Patrol, has counseled officers anguished by the loss of life on their watch even when they could not have prevented it.

He worries about "the high degree of animosity toward law enforcement in general" and said most are simply trying to do the job of protecting the public. "It's just a tough situation," he said. "They don't make the law, but they are charged with the responsibility to enforce the law."

At the same time, he noted that some police officers may not have received necessary training and may be too quick to assume people are criminals based on their race or economic class.

He encourages church leaders to reach out to the law enforcement in their congregations and in their broader communities.

Ohio East Area Bishop John L. Hopkins, whose area encompasses Cleveland, said churches are responding to law-enforcement concerns with prayer. They also are striving for better relations between police and the communities they serve, but that remains a challenge.

“My experience in all kind of community tensions is that you need to develop relations before the problems come,” he said. “I am proud of churches that have been developing relationships. … It’s harder than 30 or 40 years ago when churches were more prominent in the community.”

The United Methodist Commission on Religion and Race offers resources for congregations to have “vital conversations” about violence and working with law enforcement.

“There are decades of tension in terms of relationship between law enforcement and especially poor, ethnic communities," Hawkins said. "Churches need to do their own thinking about what are the ways we heal that gap."

Prayer, she said, is where congregations should start. “But if we never get up off our knees and never do something with what we’re hearing from God in these conversations, then we are not fully being the church.”

Beyond conversation, the Board of Church and Society — which advocates for the denomination’s social teachings — is calling for broader policy changes nationwide.

A statement titled “Repent — Reconcile — Restore,” encourages United Methodists to advocate for evaluation of law enforcement practices, the demilitarization of police forces and the establishment of independent citizen-review boards. The statement calls for establishing economic and social systems that ensure the welfare of all, as well as strong nonviolent direct action against injustice and institutional racism.

United Methodist Women, in a statement, also calls for embracing the church's tradition that challenges "the status quo when the norms of society do not honor all human beings as children of God."

Much of the problem boils down to trust, Bishop Ernest S. Lyght, interim leader of the New York Area, said in a statement. He urges police to get out of their cars and walk around the people they serve.

In the immediate aftermath of the grand jury decisions, Daquel Harris found comfort in the presence of her church family at Church of the Village. She was leading a Bible study when the grand jury’s decision in the Garner case was made public.

“I can’t think of any place I’d rather be when I get news like that,” she said.

Her church has been trying to find ways to witness to justice. On Sunday, Nov. 30, congregants after worship took a photo to show solidarity with nonviolent protesters in Ferguson. Church members showed the “Hands up, don’t shoot” gesture.

Retired Bishop Alfred Johnson, the church’s pastor, said he understands his congregation’s desire to act. He noted that as an African-American male, he was stopped and frisked by police more times than he could count when he lived in Philadelphia.

“We want to give people a way to respond, not just to hold it in but to find a way to do something positive. As the Scripture says, be angry but don’t sin,” he said, referencing Ephesians 4:26.

“As the cross was transformed from a symbol of shame to a symbol of power, that’s the way we want to try to make this thing happen.”