For one young adult serving as a United Methodist mission volunteer in Brussels, the deadly terrorist attacks on the city’s airport and subway system has led to a new description of his ministry: “missioning with fear.”

Nicodemus “Nick” T. Doe, a Global Mission Fellow from Liberia assigned to the Churches Commission on Migrants in Europe, noted that even though Christians believe “God is our protector” and that he is with us to the end, the March 22 tragedy in Brussels brought fear and sorrow.

“The situation is cooling down,” he wrote in an email to United Methodist News Service, “but I’m still ‘missioning with fear,’ fear with how one can move from one place to another without terror.

“My heart is filled with fear, but also with hope and courage that God can and will help prevent such horrible acts from happening again in Brussels and the country at large, including other parts of the world.” 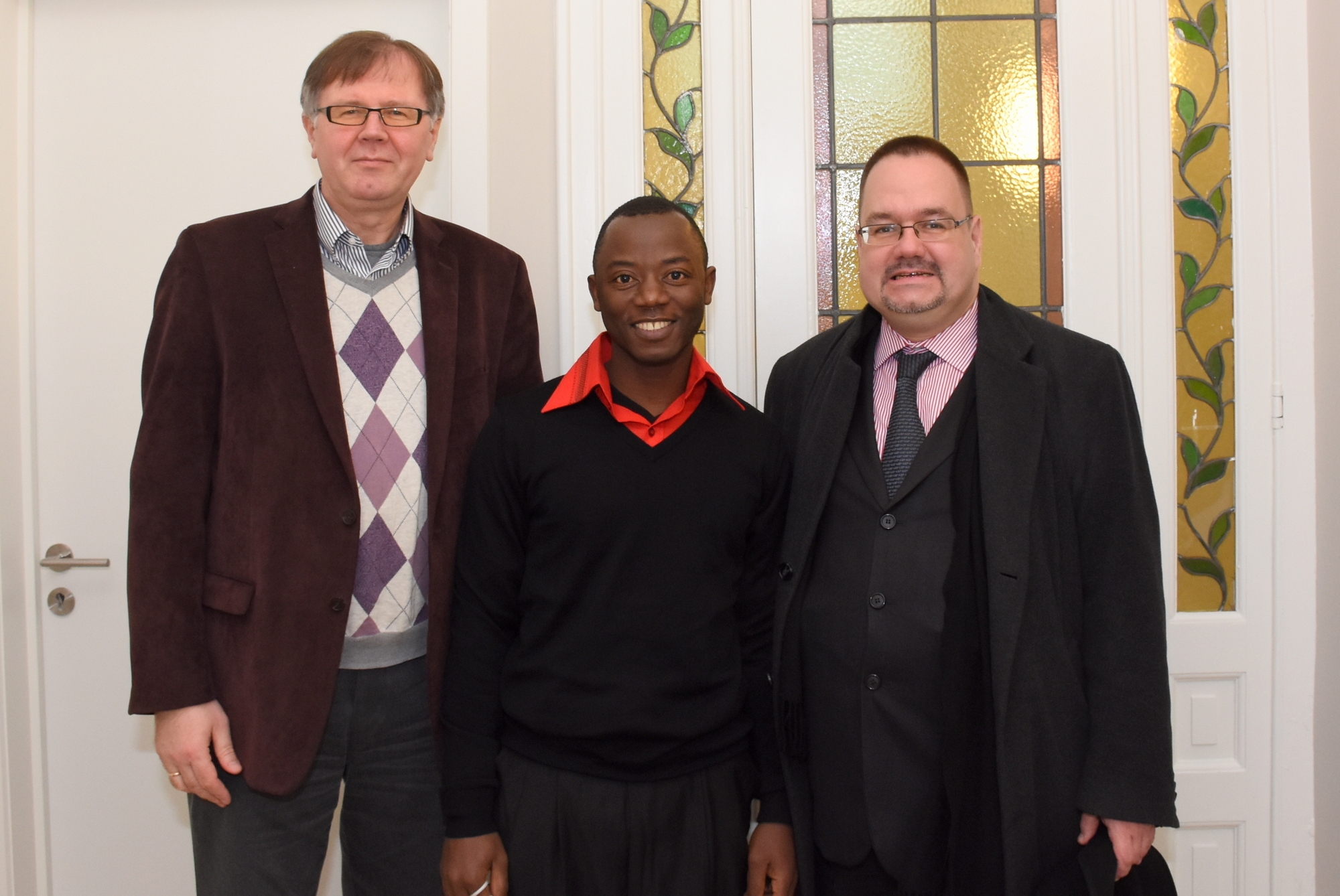 The day before the March 22 terrorist attacks in Brussels, Nicodemus T. Doe (center), a Global Mission Fellow with the United Methodist Board of Global Ministries, met there with his two supervisors — Ullas Tankler (left), Europe Secretary for Global Ministries, and Torsten Moritz of the Churches’ Commission on Migrants in Europe. Doe says he now is calling his ministry “missioning with fear.“ Photo courtesy of Ullas Tankler.

The subway bombing was at a Metro station near the commission’s office where he works, Doe said. Other faith-based, nongovernmental organizations also have offices at the Ecumenical Center.

“My prayers and thoughts are with the immediately victims and their family for God’s comfort and peace and his mercy for both the victims and perpetrators of the attacks,” Doe added.

Two directors of the United Methodist Board of Global Ministries were headed home to Africa and in transit through the Brussels airport when the twin bombings occurred there. Thomas Kemper, the mission agency’s top executive, reported that he finally spoke with Yeabu Kamara, from Sierra Leone and Elvira Moises, from Angola. “Both are safe in Catholic family’s home after traumatic experience at the airport.” Kemper tweeted at 7 a.m. EDT March 23.

Contact with the family was made through a Catholic priest that Moises knows in France, Kemper said. Because they do not have a visa for Europe, the pair will have to wait in Brussels until they can secure seats on another flight to Africa after the airport reopens.

Religious leaders in Europe and around the world condemned the terrorist attacks. “The Protestant Federation of France, in solidarity with all those who work for justice, peace and order, expresses its determination to pursue its mission of witness stunning hope and resist all forms of fanaticism,” wrote François Clavairoly, president.

The Rev. Olav Fykse Tveit of the World Council of Churches condemned the lethal attacks as “wicked and indiscriminate” and called for prayers for those affected.

Members of a mission team from the United Methodist East Ohio Conference are safe after the attacks. Two of the five-member team were in the airport when the attack occurred at the ticketing counter. Read earlier UMNS story.

The same afternoon as the bombings, a scheduled Anglican mass at the Diocese in Europe’s cathedral in Brussels went ahead in an “act of defiance” against the terrorists.

The Venerable Colin Williams, preacher at the service, arrived in the city just before the explosion at the Maelbeek Metro station and made his way on foot to the cathedral.

“Sirens sounded and helicopters hovered overhead,” he told the Anglican Communion News Service. “Going ahead with the service felt like an act of defiance; and as the Eucharist began we lit candles to show again that the Light has come into the world and the darkness cannot overcome it.”