For the Fulani tribe in West Africa, religion or becoming Muslim is not a matter of opinion or open to debate.

A Fulani child is born Muslim and observes Islamic tradition from birth until death. Any deviation from the tradition endangers the relationship with tribe and family.

For a United Methodist pastor, the Rev. Mariama Bockari, now superintendent of the Northern Sierra Leone District, the path to Christianity was more than rigorous. It was often life-threatening.

"My father was an immigrant Fulani trader from neighboring Guinea. He came to Sierra Leone and settled in Kossoh Town, a rural settlement in eastern Freetown, the capital. He met my mum, also a Fulani; they married, and I was the first child. They are typical Muslims, which practically qualified me as Muslim," Bockari said.

Bockari became a Christian after a local United Methodist pastor in the neighborhood prayed for her son, and the child recovered.

"My child fell ill 21 months after his birth and used to convulse between five to six times a day. Due to his ill health, I used to consult several sorcerers just for him to get well," she recalled. Sorcery or seeking the opinion of soothsayers is an acceptable practice in the Fulani culture.

"I did everything humanly possible, but I failed. Instead, the sickness grew worse and worse. It was at that time that one of the sorcerers told me I needed to hide from my parents because they were the ones responsible for the poor health of my son," she said. "So, I would hide from my village and go to the neighboring village and spend the whole of the day and only return home at night."

One day as she was returning home, Bockari ran into Pastor Kamanda. The pastor asked why she looked so dejected.

"Then I explained to him that it was due to the poor health of my son. The man said to me, 'Why can't you try Jesus?' Then I said to him, 'I have tried people that I have seen. Now you are telling me about somebody I've never met before.' So, I just walked away and left him standing there," she said.

The pastor refused to be ignored and started visiting Bockari and her sick child. On his first visit, he asked whether she had started going to church as he advised when they first met. Bockari said she categorically told the pastor to leave her alone and that she was not interested in what he was saying or trying to help her do.

'Mummy, let me go to church' 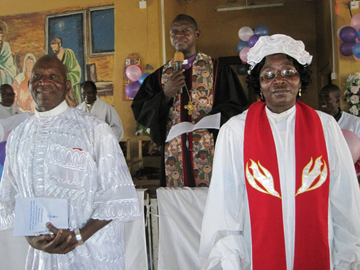 Bishop John Yambasu (in background) presents the Rev. Mariama Bockari (right), supported by husband, the Rev. David Bockari (left), to the Makeni congregation upon her induction as district superintendent.

"But then my ailing 5-year-old son said to me, 'Mummy, let me go to church. Maybe I'll get well.' So, he went to church with the man that came to visit us," she said.

Bockari started observing that as he continued to go to church, the convulsions that had attacked her son five or six times a day dramatically reduced to once a day, then once a week, once a month and, eventually, once a year until they finally ended.

"And so, I started following him to church, but in hiding for fear of my people," Bockari recalled.

Her short-lived secret happiness suddenly turned into a nightmare when her parents discovered she had been going to church. They asked her to explain why.

"The Lord that he served has healed him. Therefore, I decided to follow him to church to serve the God that healed my son," she recalled explaining. Her grandmother swore that she would never prosper as long as she had allowed the Christians to pour water - referring to baptism - on her head.

"It would have been better for you to leave that boy to die rather than going to church," the grandmother told her repeatedly.

"I started experiencing difficulties - problems came one after the other; sickness in similar succession to an extent that some of my people agreed to destroy my life because, according to them, I had betrayed Islam, the religion which they hold in very high esteem," Bockari said.

"My grandparents specifically sought ways to destroy my life," she recalled, citing an instance in which a group was hired to waylay her when she visited her father in a village in the diamond-rich Kono District in eastern Sierra Leone.

Plot to kill her

She was told her father was critically ill and near death. A family friend told her of the plan to kill her on the path leading to her father's village. "If you go, that will be the end of your life," she said her informant sternly warned. She cancelled the trip.

Later, her father called to disown her. He said that as long as she had chosen to follow the Christian faith, she was no longer his daughter or a member of the extended family. Her entire family supported him. Bockari said she was devastated because the extended family culture is one of the values of the Fulani. "But I continued to pray," she said. 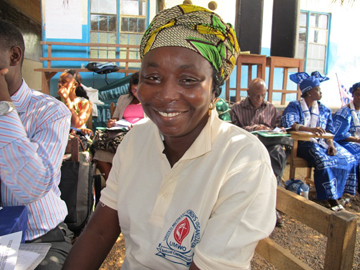 Bockari smiles during the United Methodist Women 2011 Convention in December 2011 at Baoma in southern Sierra Leone.

Later, she received another message that her father was seriously ill and near death. This time, he was truly very sick. "So, I made up my mind to visit him because he sent word that I should go. I fasted and prayed and went along with my two sons." When she arrived, her father, who had been sick for three months, rose from his sick bed and sat down.

"He prayed for me and blessed me. The one that previously said, 'Crucify her,' was now blessing me. He said, 'I now realize it is God that called you. I have no alternative but to allow you to continue in ministry because no one can stop God's plan for you.'" She said she believes the dramatic turnaround in her father's position was influenced by the power of the prayers she continued to say during her difficult moments.

"He blessed me," she continued. "He called the other imams around because he was a 'chernor' - head of the local mosque with the rank equivalent to pastor in charge. They all prayed for me and blessed me. Though they did not acknowledge Christianity, I believe it was the power of God that compelled them through my prayers to bless me.

"So it was after that point that my father reconciled me with the family. Unfortunately for me, though, that was the last time I saw my father," Bockari said. "The war broke out in the following years. He was on his way to seek refuge in Guinea when he fell sick and died. But I thank God we reconciled before he died."

Bockari believes she is the proverbial stone that the builder rejected that has now become the head of the corner. She now is the breadwinner for the family that rejected her.

"Those of my people who rejected me cannot now do without me. I am now head of the family because of the blessings that they see God is bestowing upon me," she said.

She said her ministry has been blessed because she has always triumphed in difficult situations. "In all the stations I have served, I have always been admired, always been appreciated, because people have never wanted me to leave each time I had to go on transfer."

Bockari is happily married to the Rev. David Bockari, now retired, whom she met at a retreat after her Muslim husband abandoned her and her two sons because of her conversion to Christianity.

She is proud that her children are success stories. The older son graduated last year with a bachelor of arts degree. The younger son, a teacher, has opted to become a pastor, too. He is now pastor in charge at Kossoh Town United Methodist Church, where Mariama Bockari was pastor before her appointment as district superintendent.

*Jusu is a United Methodist communicator based in Sierra Leone.