Cellphone advertisements are generating income that women of The United Methodist Church in Côte d’Ivoire hope to use to start small businesses.

The Côte d’Ivoire United Methodist Women received a check this month for $1,000 U.S., earnings on a social media network, and the network also awarded another $1,000 as a grant to the women’s group.

Pubcell CI made the payment as part of a profit generated by 400 women who joined the social mobile network in December 2013.  The check was presented at a ceremony on Nov. 16 at Nouveau-Koumassi Cité de grâces United Methodist Church in southern Abidjan. The women earned the money for registering their names, addresses and cellphones numbers in the database of the company.

“This will give women a purchasing power that can lead them to overcome the defects associated with poverty such as prostitution, begging …” she said.

Pubcell’s members share the advertising revenues. When a member of Pubcell CI gets an advertisement on their mobile phone, that member receives part of the profit. Groups as well as individuals can benefit. 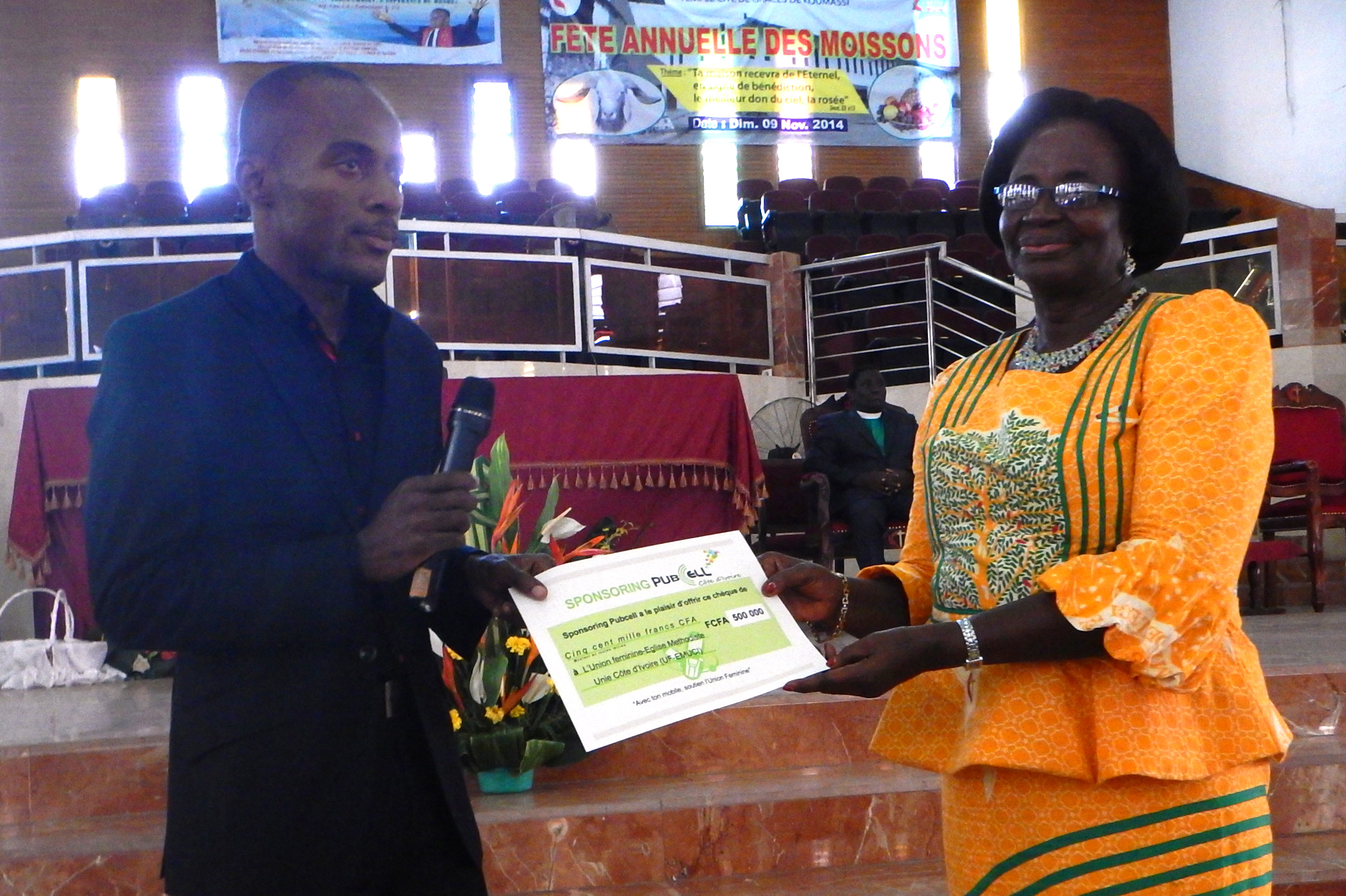 Georgette N’Da, president of the women’s fellowship of Israel Treichville United Methodist Church, said that for each sponsored message that she receives on her cellphone, she gets the equivalent of one penny for each dollar of advertising. She now has $20 US in her cellphone account.

N’Da, a widow with two children, is hoping to save $100 in order to open a small food business.

“United Methodist Women have trusted us and we want to do more for them,” Diaho said.

Vincent N’Goran, top executive of Pubcell CI Board of Administration, gave the second check to Adou.

“If with this little loaves and fish of U.S. $1,000 you are able to sponsor women who will reimburse in order to help other women, we will multiply the amount by the end of next year,” he said. That was a reference to the afternoon’s sermon by the Rev. Aurélie Gnagne, the company’s chaplain, on the story of Jesus multiplying the five loaves and two fish in John 6:9-13.

Though it may seem a drop of water in the vast sea of the needs of women, Adou sees it as “a drop that can leave indelible traces in the church and the society.”

She promised that the women would work harder for next year’s check to be $100,000. Her executive committee will select projects in all the 17 districts of the Côte d’Ivoire United Methodist Church to receive funds.

Bishop Benjamin Boni praised the initiative of the young Africans who started PubCell CI, and said Africa needs more role models like them to help people be optimistic about the future of Africa. Pubcell CI has won many international accolades, including the World Bank award for the best social network in Africa.

“What you have done  . . . proves that young Africans can create things that can change the world. Don’t be an Afro-pessimist, " Boni said.

Broune is the communicator for The United Methodist Church in Côte d’Ivoire.