The Africa College of Bishops has proposed the creation of seven central conferences in Africa, which now has three, the college’s president said.

“The deliberations were a little intense, but finally by the power of the Holy Spirit we reached a consensus,” he said. “What we agreed however, is not the final decision, but just a recommendation that has to go to the Standing Committee on Central Committee Matters,” he said. The Africa Central Conference recommended changes to its borders at its meeting last year.

Under the seven-conference proposal, this is how the West Africa Central Conference would be divided: Sierra Leone, Côte d’Ivoire and Liberia in one; and Nigeria, Cameroon and Niger in another. 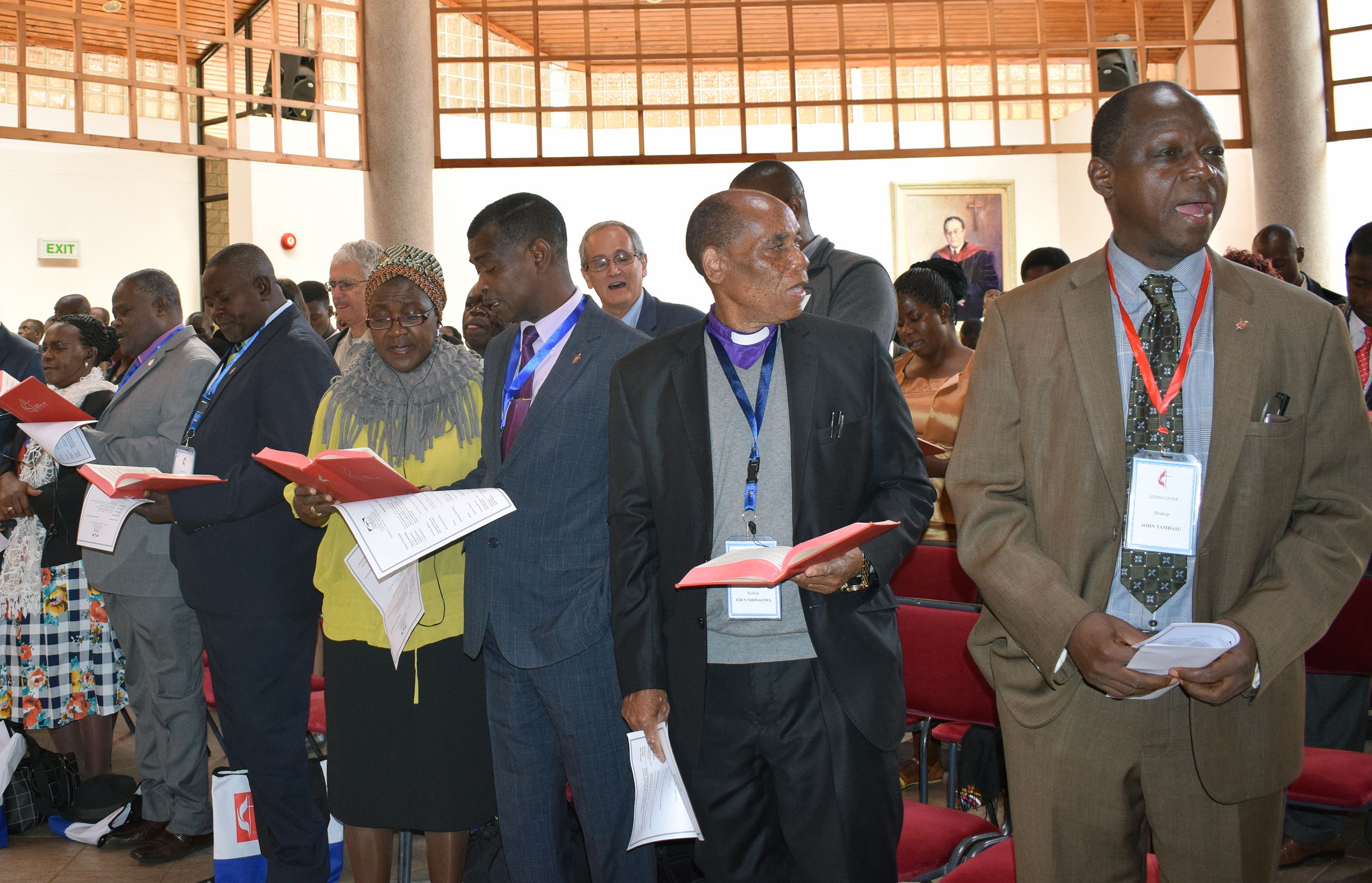 Residential and retired bishops attend worship during the Africa College of Bishops retreat in Mutare, Zimbabwe, in September. Among the issues discussed were the five new episcopal areas starting in 2020. Photo by Eveline Chikwanah, UMNS.

The Africa Central Conference would be divided as follows:

The Congo Central Conference would be unchanged and would still encompass all of the Democratic Republic of Congo and Tanzania, as well as part of Zambia.

“The GC decision must enable us to focus on the continent as a whole rather than focusing on our individual sectoral, tribal or regional entities,” Yambasu said. “It must make the African central conferences more functionally effective in terms of organization, intentional leadership development, new church growth, new mission engagement, economic viability and sustainability. Anything less is unacceptable.”

The discussions took place at a Sept. 3-9 retreat for the bishops that Yambasu said was marked by in-depth conversations among the serving and retired bishops who attended.

“It was a very great retreat. The level of conversation, the discussions around the table and the frankness and openness with which bishops addressed issues was unprecedented. We have never had such in-depth conversations among ourselves during a retreat,” Yambasu said.

Yambasu, who was presiding over his first retreat as president of the Africa College, highlighted the critical issues for discussion in his opening address.

Among those critical issues were human sexuality, he said. The Commission on a Way Forward, authorized by General Conference 2016, is attempting to find a way through the denomination’s impasse over same-gender marriage and the ordination of openly LGBTQ clergy. The commission is sketching possibilities for The United Methodist Church’s future that it will present to the denomination’s bishops in November.

“It was not a matter of whether we endorse homosexuality or not, but we focused on two issues —  primarily how we as African bishops can maintain the unity of the church in the light of this divisive issue,” Yambasu said. “We resolved as bishops it is our responsibility amidst all our diversity to endeavour to teach our people about the importance of maintaining the unity.”

The bishops discussed possible implications if the church was to divide over the issue of homosexuality.

“We discussed what would happen to the global church and the church in Africa.  We decided to immediately begin educating our people about how to financially sustain our ministry and the mission of the church on the continent if the church divides,” he said. In April, Yambasu addressed the Sierra Leone Conference on this issue, urging the conference to reduce its reliance on overseas support.

The restructuring of Africa University, which resulted in the Faculty of Theology being absorbed into the College of Social Sciences, Humanities, Theology and Education, was also a major issue for the bishops.

“Any restructuring that merges theology with other disciplines is a major paradigm shift in program emphasis as envisioned by the founders of the institution,” Yambasu said.

“For us the restructuring means killing the church in Africa because we need pastors and leaders. We came out with a suggestion that theology stands on its own with a full faculty and a dean and it focuses on postgraduate degrees.”

President-elect of the Council of Bishops, Florida Area Bishop Kenneth H. Carter Jr., attended the Mutare retreat. The gathering was held under the theme “The journey ahead” drawn from Joshua 3: 1-15. Carter is also one of the three moderators for the Way Forward Commission.

“Bishop Carter’s presence was a heart-warming experience,” Yambasu said. “I believe his attendance gave him the opportunity to have in-depth understanding of who we are as Africans. At the Council of Bishops, we discuss global issues, but here we tackled specific issues affecting the continent.”