United Methodists from across the country plan to have some parties on the evening of Jan. 20 to pray and talk about ways to affirm Wesleyan values and explore challenges ahead as the 45th president takes office.

“There is a growing movement across the church to provide sanctuary for people who could be negatively impacted by polices of the incoming administration and Congress,” said Susan Burton, director in the denomination’s social justice agency based in Washington.

Listen to webinar on organzing a house party.

Find an event near you or create your own house party.

Those concerns grew into an idea for house/church parties to engage in ways to “Reclaim the Common Good,” she said.

Burton said colleagues at the United Methodist Board of Church and Society as well as other agencies in the denomination have been hearing from United Methodists across the country coming to Washington both for the inauguration and to participate in the Women’s March on Washington on Jan. 21.

The Women’s March is expected to draw thousands. Its mission is to let the new government know women’s rights are human rights, according to their mission statement.

“We wanted to create an opportunity for community and engagement in which people in local settings could participate, not only those coming to Washington,” Burton said.

The Commission on Religion and Race, Commission on the Status and Role of Women, Higher Education and Ministry and United Methodist Women along with Church and Society are preparing resources for house and church parties.

The parties are meant to be conversations about how to deal with issues that may be negatively impacted by the new administration such as the Affordable Care Act and immigration.

A resource for the gatherings developed by the five agencies is “Reclaiming the Common Good,” which 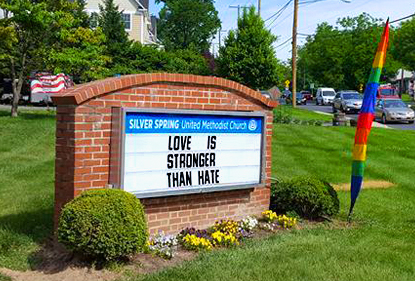 Silver Spring United Methodist Church in the Washington area will host a "Reclaiming the Common Good," house party on Jan. 20.

offers biblical and theological commitment through the church’s Wesleyan tradition.

Scripture and sections of the United Methodist Book of Discipline, the denomination’s lawbook, are offered as guides to conversations about what the church believes. The guide starts with 1 John 4:16-21, which commands, “Anyone who loves God must also love their brother and sister.”

Silver Spring United Methodist Church will host a gathering in for people coming to the Washington area from other places.

“Our church has a strong commitment to social justice and inclusivity and frankly we are in a good location,” said the Rev. Rachel Cornwell. The church is near a Metro stop, just outside Washington, and away from the crowds and traffic coming in for the presidential inauguration, she explained.

“One of the positives that has come out of this election is it has been very energizing to people who may have otherwise taken things for granted about the work we do around justice issues,” she said.

It is a way for the church to be visible and vocal about issues like immigration, caring for the poor and people’s rights, she added.

Cornwell said at the moment they are preparing for 100-150 people coming to Silver Spring for the house party.

Burton cited the biblical nature of the gatherings, quoting Micah 6:8.

“Our goal is to help people create spaces to build community and live into God’s call to ‘do justice, love mercy and walk humbly with God,’” Burton said.