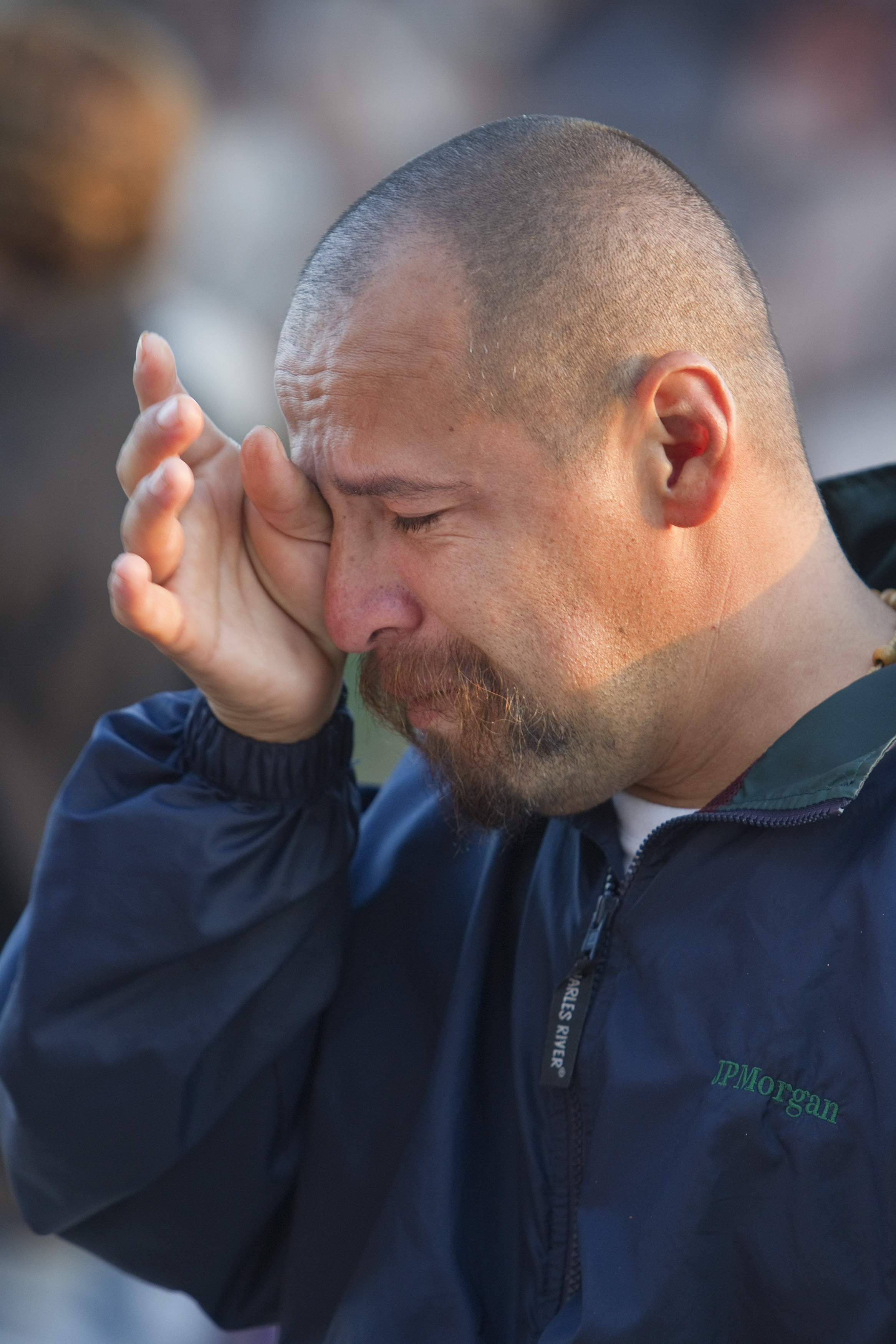 Luis Arturo Padilla Fuentes is separated from his three children, ages 4, 7 and 12 in the United States. Fuentes was attending the December 2012 Posada Without Borders worship service at El Faro Park in Tijuana, Mexico. File photo by Mike DuBose, UMNS

Welcoming strangers is a biblical mandate.

“When a foreigner resides among you in your land, do not mistreat them. The foreigner residing among you must be treated as your native-born. Love them as yourself, for you were foreigners in Egypt. I am the Lord your God.”— Leviticus 19:33-34, NIV

Yet, people crossing U.S. borders without proper documentation are breaking the law.

For people of faith, is it a choice between what is right and what is legal?

The United Methodist Church’s Social Principles state: “We recognize, embrace, and affirm all persons, regardless of country of origin, as members of the family of God. We affirm the right of all persons to equal opportunities for employment, access to housing, health care, education, and freedom from social discrimination. We urge the Church and society to recognize the gifts, contributions, and struggles of those who are immigrants and to advocate for justice for all.”

A petition before the 2016 General Conference would add: “We oppose all national immigration policies that separate family members from each other or that include detention of families with children.”

Keeping families together has long been at the heart of the church’s mission with refugees and immigrants.

The National Justice for Our Neighbors, a United Methodist network of free legal clinics for immigrants, just filed a brief before the U.S. Supreme Court urging it to uphold President Barack Obama’s expanded Deferred Action for Childhood Arrivals and Deferred Action for Parents of Americans program.

Those executive orders focus on preventing families from being separated by deportation, said Rob Rutland-Brown, director of the National Justice for Our Neighbors.

“Executive action is aimed towards enabling parents of Americans and green card holders as well as an expanded group of children who arrived here as immigrants to get deferred action. That really means they are not an enforcement priority,” he said.

It is not JFON’s role to circumvent the laws, Rutland-Brown added. “Our role is to help immigrants access laws and access justice and to advocate for laws that stand up for the rights of immigrants.”

United Methodist Women members support the brief. UMW is among several of the church’s general agencies that are submitting new or updated resolutions on immigration to General Conference. Their proposed new resolution, “Stop Criminalizing Communities of Color in the U.S.,” addresses immigration enforcement as well as mass incarceration and criminalization of U.S. citizen communities of color, said Carol Barton, UMW executive for community action.

Fleeing for their lives 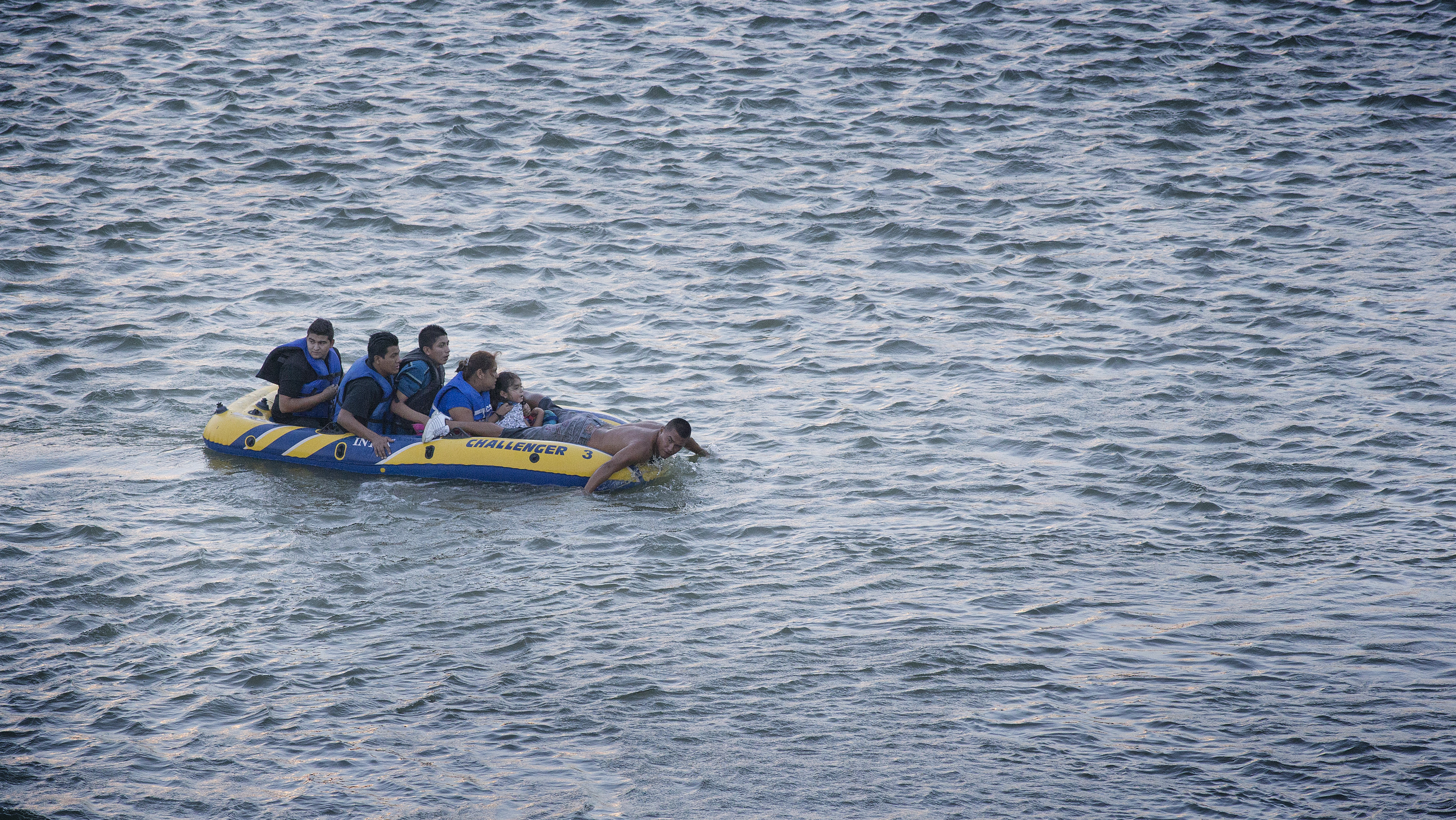 A coyote, or smuggler, (right) uses his hands to paddle a rubber raft full of immigrants across the Rio Grande from Mexico to the U.S. side of the river in Roma, Texas, in August 2014. File photo by Mike DuBose, UMNS

What kind of desperation must make a mother send her child to face the dangers of crossing the border alone? That is the question asked by the Rev. Fred Morris, pastor of North Hills United Methodist Church in Los Angeles.

His church has a ministry with 48 children who were among the minors crossing the border in California.

“It is our mandate to be God’s people, to be seeking abundant life for everyone and in this case defend people’s lives.”

In San Antonio, retired United Methodist pastor the Rev. Albert Clayton and his wife Janice, a retired English professor, are helping the mothers and children who end up “dumped” at the bus station.

The families, mostly unaccompanied children, are being housed in two private prisons in Dilley and Karnes City, both San Antonio suburbs.

“ICE (Immigration and Customs Enforcement) are trying to get the state to declare these two places as child-care centers,” Clayton said. “One of the horrible things is these corporations make their money based on how many people are detained in those centers.”

The Claytons are members of the International Welcoming Committee formed in San Antonio by faith groups concerned about the people flooding across the border. 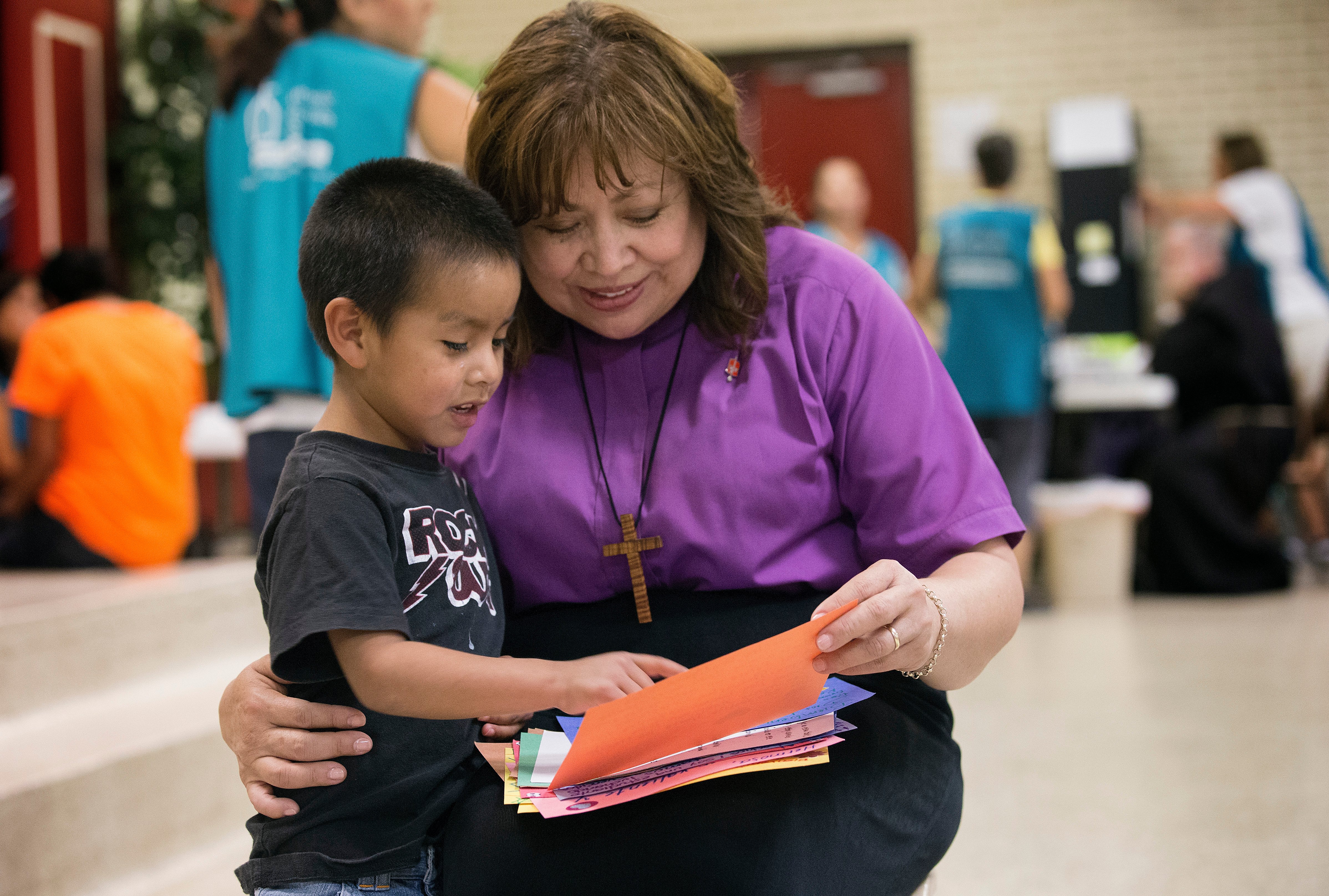 “These woman and children, if they go back home, they are going to be raped, tortured and murdered by drug cartels,” he said.

“I consider this one of the major crises of our civilization,” Clayton said, including the people fleeing from the violence in Syria.

Francisco Perez Cordova, his wife and five children were living in fear that one day Francisco might not make it home.

As an undocumented worker with deportation papers, he was likely to end up back in Mexico before his family even knew he hadn’t made it home from work.

St. Francis of the Foothills United Methodist Church in Tucson, Arizona, took Cordova into their church building and offered him sanctuary until an immigration attorney could look at his deportation orders.

Cordova lived in the church for about three months. An attorney fixed his paperwork and his story has a happy ending. He recently was able to save enough money to make a down payment on a house for his family.

“They are special people, it is a special church,” he said of St. Francis of the Foothills. “If they hadn’t helped me maybe I would already be back in Mexico. I tell them a lot of times, thank you,” he said.

St. Francis is one of 50 United Methodist churches that are part of the Sanctuary Movement that offers a safe place to live for undocumented workers under threat of being deported.

The Sanctuary Movement is an ecumenical, faith-based movement that started in the 1980s and was re-formed in 2014.

The Rev. Jim Wiltbank, pastor of St. Francis of the Foothills, said his church was part of the movement in the 80s.

“It is in our DNA, this church has always helped those overlooked and treated unfairly.”

North Hills in Los Angeles is also part of the Sanctuary Movement.

Morris said the Obama administration has been deporting a 1,000 people every day for the past seven years. “U.S. Christian citizens have a spiritual obligation to challenge our government,” he said.

“I think immigrants are affected by the culture of xenophobia, hateful rhetoric, and the church has a role to make sure they feel welcome, to change the narrative,” Rutland-Brown said. 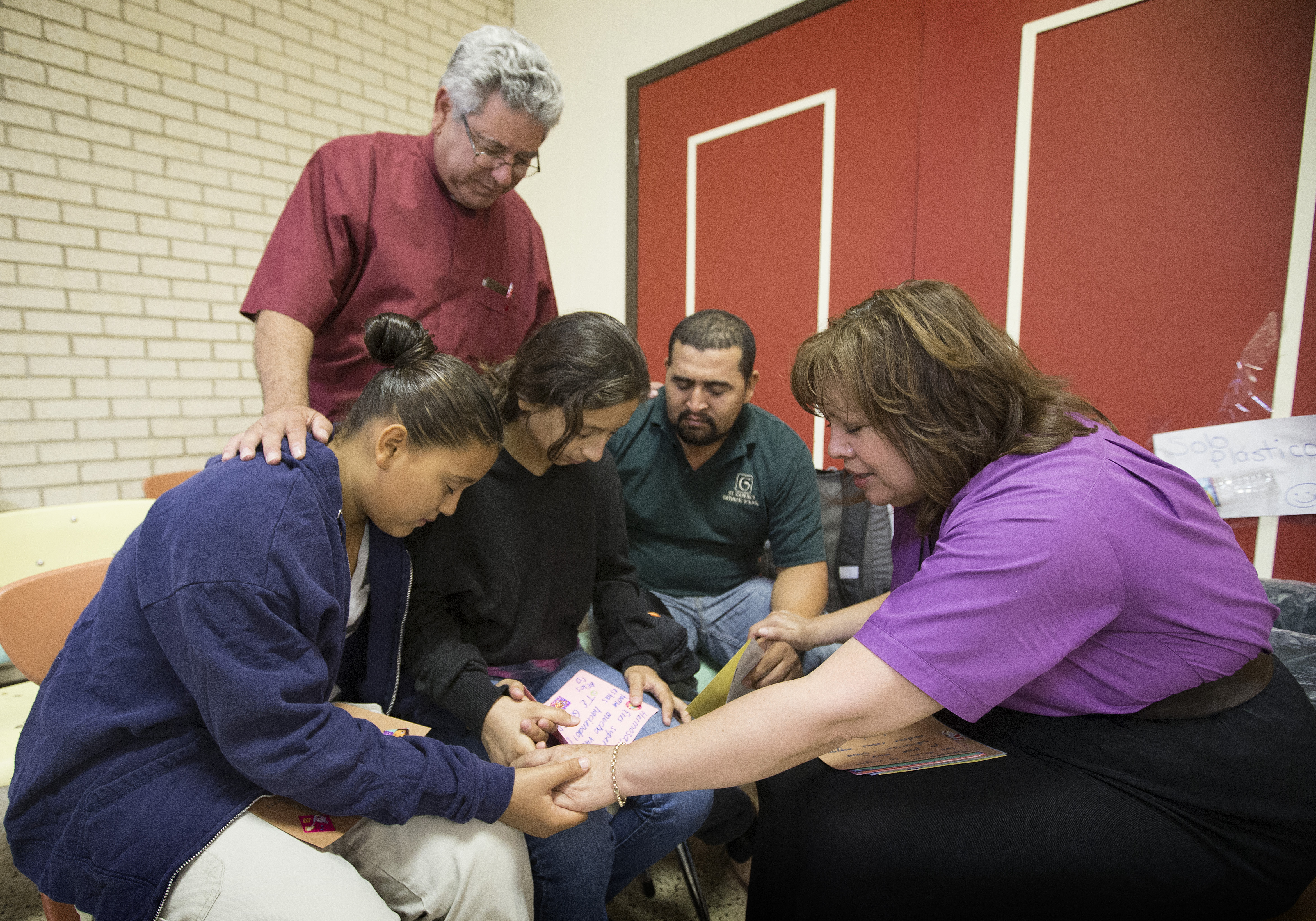 He pointed out over half of the states have some form of proposed legislation to deter acceptance of refugees, particularly Syrian refugees.

“And this is the most vetted group of immigrants that there are,” he said. “It is unfortunate that we are in the position of not wanting to welcome the most vulnerable class of individuals in the world who are seeking protection. It is not in our Christian tradition to turn them away.”

Rutland-Brown said it has been gratifying to work with United Methodists and other faith groups.

“Many United Methodist churches and faith coalitions are resisting the inhumane, illegal treatment and flawed approaches to law enforcement,” the Rev. Susan Henry-Crowe, top executive of the Board of Church and Society wrote in an Ash Wednesday column.

“Groups such as the United Methodist Immigration Task Force, the Sanctuary Movement, Church World Service and Justice for Our Neighbors are all actively engaged in caring for and aiding our neighbors.”

United Methodist Bishop Minerva Carcaño, California-Pacific Conference, has been at the forefront of striving for a just immigration law for many years.

She recently preached at the National Cathedral in Washington. “We continue to hear presidential candidates offer up a wall of human separation as a solution to the broken U.S. immigration policies,” she said in her Feb. 28 sermon.

California is continuing to deal with storms causing devastating floods, and it’s still too soon to assess the scope of the damage. But United Methodists are already doing what they can to help.
Annual Conferences

The largest United Methodist conference in the U.S. announced it is blocking church exits as a result of “the misleading, defamatory, and false statements and materials shared with local church members.”
Local Church