"Repentance by itself makes the repentant feel good. We cannot just apologize. We need to focus on healing relationships. And then we need to realize that the learning is just beginning."

Blenda Smith speaks from experience. The white laywoman from the Upper New York Annual (regional) Conference has served as a director of the United Methodist Commission on Christian Unity and Interreligious Concerns since 2004. Smith said she has moved from "cluelessness" to awareness, especially about the concerns of Native Americans and other indigenous people.

Eight years ago, Smith began working with another director - the Rev. Carol Lakota Eastin, whose heritage is Lakota, Yakima and Shawnee. Smith and Eastin, pastor of First United Methodist Church in Rantoul, Ill., were part of the team that planned the "Act of Repentance toward Healing Relationships with Indigenous Peoples" at the 2012 General Conference in Tampa, Fla.

At the close of that service, delegates picked up symbolic stones from the "river of life" scattered in the worship area. They were encouraged to take the stones back to their communities "as a covenant to continue to listen and to walk the journey of healing with one another."

That service was meant to be a beginning, Eastin said.

"During the next four years," she explained, "we're calling the people of The United Methodist Church to enter into a longer journey of conversations with indigenous people." 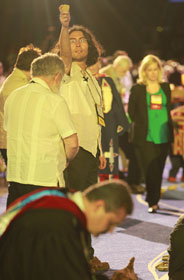 Skylar Corbett-Hecocta, a member of the Klamath tribe from Oregon, blesses The United Methodist Church by holding his stone toward the north, south, east and west and the sky. A UMNS photo by Kathleen Barry.

For some conferences, the process started years ago. For others, it is a new adventure. However, Eastin believes all can find something helpful in a new guide prepared especially for annual conferences and local churches. Produced by United Methodist Communications and sent to annual conferences in June, the guide is on a two-disc DVD resource.

The journey to the 2012 Act of Repentance began at the 2000 General Conference. The first service of repentance stated the sins of racism for which the church was responsible and asked the African Methodist denominations for forgiveness. In 2004, A Service of Appreciation for Those Who Stayed was dedicated to the African-Americans who kept their membership within The United Methodist Church. Four years later, Truth and Wholeness: Understanding White Privilege called white United Methodists to acknowledge their unearned privilege and seek to move beyond it.

"The service of repentance and healing helped us begin to see a small part of our history and the beginning of repentance," Smith said.

She credited Stephen J. Sidorak Jr., who heads the commission, with creating an advisory council, chaired by Fassett.

"Over our years together," Smith recalled, "we pulled together some incredible minds that told us, 'We can't just repent.'"

She said the experience helped her to recognize white privilege and "the present-day trauma" with which indigenous people live. "It's part of who they are. They are never given the acknowledgment and honor they need." 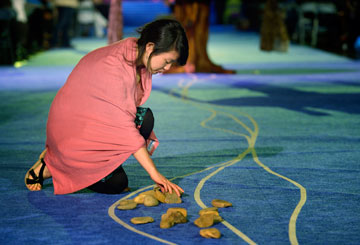 A delegate picks up a stone in the aisle during the Act of Repentance at the 2012 General Conference in Tampa, Fla. A UMNS photo by Paul Jeffrey.

Smith's local church will use the study guide this autumn. "It's a very easy program to lead," she said, "and I'm looking forward to it." She said there are six Native American tribes within her conference, and the committee on Native American ministries will help them use the resource "with integrity."

The time has come, Eastin added, for "indigenous people to take their full and rightful place in the church and the community."

Church groups have organized a prayer vigil and issued statements in support of a Filipino pastor known for her social justice work. She has been charged with attempted murder, but fellow United Methodists say she is innocent and the charge is meant to silence her.