John Moyo is a regular feature at soccer matches played in Bulawayo, Zimbabwe. Armed with a cooler box and dressed in the colors of his favorite team, the 18-year-old walks up and down the soccer pitch - often paying more attention to the contents of the box than the game.

For Moyo, the packed soccer stadium is not a place to unwind; it's his workplace. Following the death of his parents, Moyo became the breadwinner, and he struggles to care for his three siblings. He sells about 100 locally made Freez-it drinks at each match, raising $20 for his family.

His quest to eke out a living received a major boost when he attended the August 2012 Youth Ministries Academy in Harare to empower young adults and address social and economic challenges encountered by 12- to 22-year-olds.

The Rev. Sekai Pfupa, Zimbabwe West Annual (regional) Conference youth director, said the academy was "the first of its kind to be held in Zimbabwe, and we tailored the program to include issues which affect these young adults."

When the program was classified under the United Methodist Youth Fellowship, which catered to ages 12 to 30, older teens were sometimes overlooked, and concerns specific to their age range were not addressed.

Youth constitute 50 percent of the membership of the six districts in the Zimbabwe West Conference, and Pfupa said the church realized this segment was largely ignored. Many ended up loitering with nothing to do.

Armed with her Bible and a myriad of ideas on how to empower the youth who look to her for guidance, Pfupa is a woman on a mission. Lack of finances has been her greatest obstacle. The two-day academy took up her office's $2,000 USD annual budget. "The budgeted finance we got from the church was just enough for the workshop. We cannot follow up with participants to see what they are implementing in their respective districts."

She had planned to hold skills-training workshops, teaching members to make sandals, but lacked the funding to do so. However, Pfupa was upbeat that the church would provide capital for the potential shoemakers to start their income-generating projects. "We envision a situation where those trained would remit 10 percent of the income they would generate to a revolving fund which would assist other youths to start their projects," she said. "We have ideas but nowhere to start from." 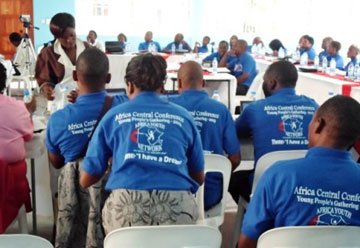 During the academy, church member Grace Musuka donated $50 to help youth from the Mutoko-Mudzi District kick-start an income-generating project of their own.

Most choose to sell goods that are affordable to them. Like Moyo, Estery Mutsikadowo sells Freez-it drinks. The thirst-quenchers are a major hit, especially at public gatherings during Zimbabwe's summer. Packaged in low-cost materials and manufactured in a variety of flavors, Freez-its sell for 10 to 20 cents.

"I can manage to buy a carton of 50 Freez-its, and after selling them, I realize a profit of about $5," said Estery, who is also involved in peanut-butter making.

For Pfupa, the Academy is the first step toward self-sustenance for these youth, and she is confident that the skills and knowledge imparted by The United Methodist Church will go a long way in molding them to become economically independent and beacons in their communities.

*Chikwanah is a communicator for the Zimbabwe Episcopal Area.