The Rev. Norman Tendis, a Lutheran pastor from Austria, was committed to taking care of God’s creation and offering practical ideas to churches to help them do the same.

“From the beginning,” he wrote in the introduction of the congregational “roadmap” he developed as a consultant for the World Council of Churches, “we were given responsibility for taking care of all creation. However, the cry of the whole creation today is stronger than ever. That is why we need a strong movement of transformative faith and we invite you to be part of it!”

Tendis expected to present the resource for churches at the U.N. Environmental Assembly in Nairobi, but never got there.

He was one of 157 people who lost their lives March 10 when an Ethiopian Airlines plane bound for Kenya crashed soon after taking off near Addis Ababa. Other humanitarian workers onboard included 22 passengers associated with the U.N.

Two days later, the Rev. Olav Fykse Tveit, top executive, and other WCC staff held a public launch of that resource at the Ecumenical Centre in Geneva as a way to honor his life and work.

The “Roadmap for Congregations, Communities and Churches for an Economy of Life and Ecological Justice” is a downloadable magazine that offers a five-step program to help church members change how they deal with the economy and their ecological surroundings.

While “still a bit shaken” over the loss of Tendis, the WCC is committed to move on with his legacy, Tviet said. “We can use the roadmap not only as a discussion starter but also as a way to act immediately.”

Speaking from Nairobi, where she was attending the U.N. assembly, Athena Peralta called the roadmap resource “an invitation to congregations to live sustainably.”

Tendis was “a firm believer” that churches could do so by using the practical proposals in the roadmap, said Peralta, the WCC program executive for economic and ecological justice. 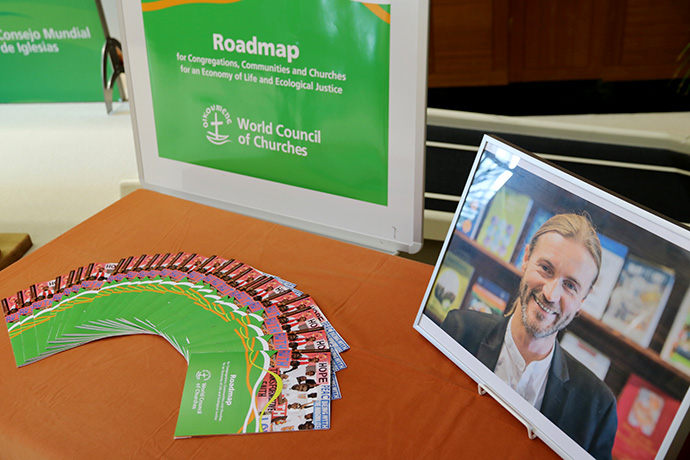 A photo of the late Rev. Norman Tendis stands next to the environmental “roadmap” he created for congregations on behalf of the World Council of Churches. Photo by Ivars Kupcis/WCC.
Download the roadmap magazine here.

Following the roadmap for “a just and sustainable community” includes such actions as providing clean water, monitoring energy consumption and moving towards renewable energies, reducing waste, practicing alternative economic models and networking with other communities and initiatives.

Congregations can start small with alternative economic models, for example, by designating a shelf in the church as a “free shop” where church members can place an unwanted item. “Those who need it can just take from the shelf,” Peralta explained.  Such a start eventually could grow into a secondhand shop or a food-sharing program, she added.

Dr. Manoj Kurian — who led the Economy of Life and Ecological Justice team that Tendis was a part of — noted that the roadmap also supports localized small-scale agriculture.

“It is actually practically guiding us to do things that will help us to be rooted to our communities, so that we are connected to the earth, related to the food that we eat,” explained Kurian, a Malaysian medical doctor and coordinator of the WCC-Ecumenical Advocacy Alliance.

The Rev. Henrik Grape, the officer for sustainable development in the Church of Sweden and coordinator of the WCC Working Group on Climate Change, said Tendis recognized the importance of local and global partners connecting on ecological issues.

“To work with Norman … was to work with a person who saw local engagement in a global perspective,” he said.

“We all have to continue this work,” said Louk Andrianos, WCC consultant for care of creation, sustainability and climate justice, speaking from Greece. “Norman was very creative and he asked communities to be creative.”

Isabel Apawo Phiri, an African theologian and WCC executive, remembered Tendis “a man with a mission” who was full of enthusiasm about engaging churches worldwide

“He was already practicing those things at the congregational level,” she said. “He knew he had a message for the ecumenical movement to share.”