When people from different countries gather for conferences and other important conversations, the “international” languages they speak often make it impossible for them to understand one another.

For over three decades, it has been the primary role of Donald Reasoner, 64, to provide and coordinate translation for United Methodists, at times catering for up to 10 different languages in one gathering.

“I see what I do as a ministry, not just as a job or a profession,” Reasoner said. “I feel a vocation to work with the church, but I don’t feel a calling to become an ordained clergy in the church. I think I can work as a layperson to help with the church, and what I see as part of my ministry is to help facilitate the communication.”

This burly figure has been visible at major gatherings, including General Conference, where delegates and leaders from around the world converge to make important decisions regarding The United Methodist Church. 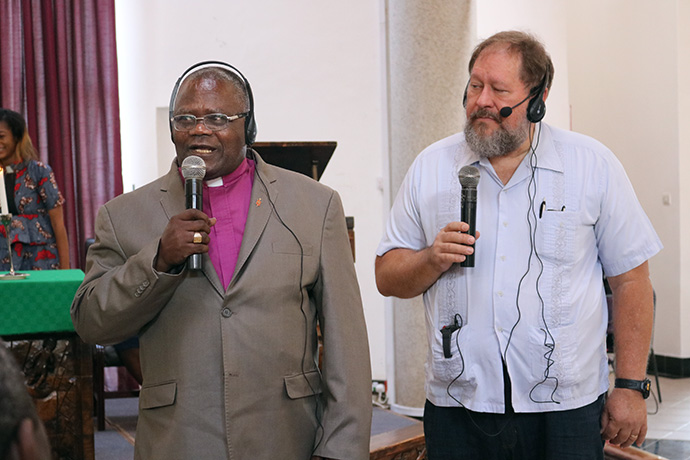 Donald Reasoner translates for Bishop Jóse Quipungo of the East Angola Episcopal Area during the 2022 Africa Colleges of Bishops retreat at Africa University in Mutare, Zimbabwe. Quipungo was addressing the university community in Portuguese during a Sept. 7 worship service. Photo by Eveline Chikwanah, UM News.

Born in California, Reasoner is the third generation of missionaries after his grandfather, a pastor, and his father, a rural evangelist who planted churches in Brazil.

“Whenever I had vacation time from school,” Reasoner recalled, “I would travel with him, so I had a great appreciation for the work of mission and evangelism and the importance of communicating in the language that people can understand and use.”

When U.S. visitors came to Brazil, Reasoner’s parents asked him to take them on a tour of the city and places of interest. He interpreted for the guests who did not speak Portuguese.

“My grandparents served 40 years as missionaries in Brazil, and my parents also served almost 40 years,” he said. “I grew up speaking Portuguese; in Mexico and Central America, it was Spanish, so I speak three languages including English.”

For almost 10 years in Nicaragua, Reasoner became an interpreter for visiting delegations and meetings, mainly Presbyterian and Methodist church groups. 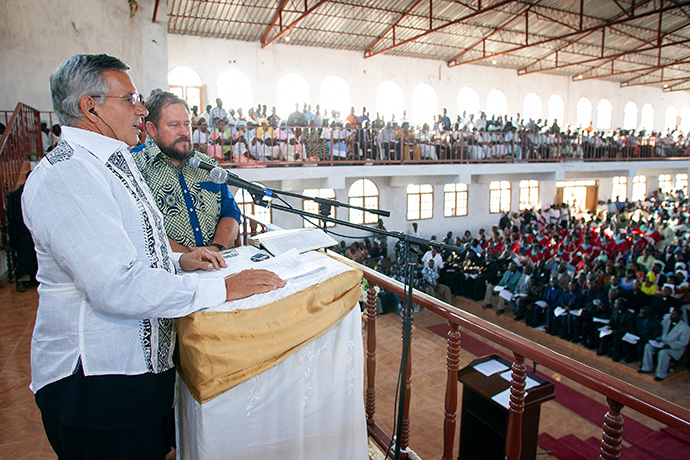 Donald Reasoner (second from left) interprets for the Rev. R. Randy Day, then top staff executive of the United Methodist Board of Global Ministries, as he brings greetings to the 2006 West Angola Annual Conference. File photo by Mike DuBose, UM News.

In December 1990, the United Methodist Board of Global Ministries commissioned Reasoner as a missionary. He was assigned to work with the Council of Protestant Churches in Nicaragua. Reasoner became a council executive in 1992 and served as a Spanish interpreter at General Conference in Louisville, Kentucky, that year.

He then moved to New York where he worked as a Global Ministries regional executive. He was the area secretary for the southern part of Latin America, dealing with church relations and the 60 missionaries in Argentina, Bolivia, Chile, Cuba, Peru and Uruguay.

“You know how, often in job descriptions, there will be a phrase at the bottom which says ‘and other things as requested’?” Reasoner asked. “That’s how the translation side started developing as I was a good interpreter.

“At the time,” he continued, “Global Ministries had 20 units of translation equipment for use when church leaders came from Latin America or Africa. I was given the responsibility of managing the equipment and interpreting if Spanish or Portuguese were among the languages being used in the meetings.”

Eventually, the agency had more than 200 units of FM equipment and 200 units of the infrared system for larger meetings such as General Conference. 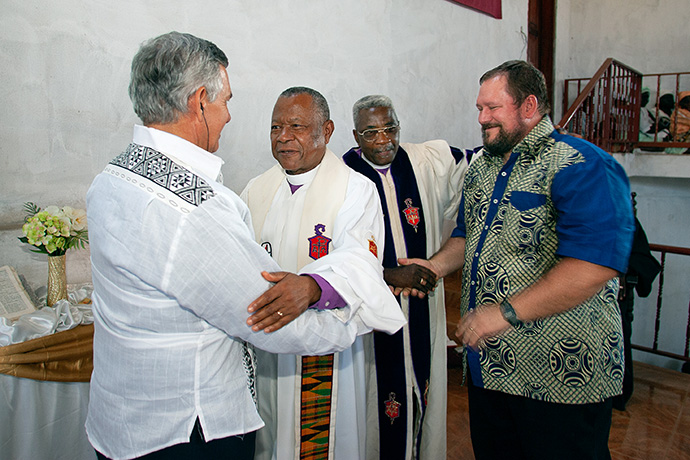 Reasoner started translating for church groups visiting Global Ministries and other United Methodist boards and agencies and then was invited to help coordinate interpretation for the General Conference.

“At first,” Reasoner explained, “I was only dealing with the equipment side of General Conference, then later became responsible for recruiting interpreters as well as coordinating equipment. For the last ‘normal’ General Conference in 2016, we had close to 200 interpreters because there were about 1,000 delegates and several thousand guests and observers.”

That year, for the first time, bishops could preside in languages other than English. Bishop Patrick Streiff, who serves the Central and Southern Europe Episcopal Area, spoke in French, and all English-speaking delegations required equipment to understand what was happening.

“We are a global church,” Reasoner said, “and not everyone speaks English. I see my work as a ministry to help build a bridge to enable that the two sides can talk to each other and let the Holy Spirit work for the synergy between them.

“The churches in Africa, Latin America, Asia and Europe,” he added, “have a lot to contribute. It’s not only the church in the U.S. Both sides have gifts and talents that they can share with each other, and it’s easier when they understand what each side is saying.

“My mission,” Reasoner said, “is to facilitate the communication process, not do it for them.  I have to be be very careful as an interpreter not to interject my ideas or my opinions. I may not agree with what participants are saying, but I have to be true to what [they are] saying and let them work it out among themselves.”

Bishop Eben K. Nhiwatiwa, who leads the Zimbabwe Episcopal Area and is president of the Africa College of Bishops, said Reasoner plays a pivotal role when African bishops meet.

“He does not only translate words from one language to the other; he (also) takes time to delve into the nuances which each word might be convey in a given context.

“The work of Reasoner in making us African bishops understand each other at our meetings is analogous to the story of the Eunuch as recorded in Acts 8:26-39,” Nhiwatiwa said. “In that story, an ancient African, the Ethiopian eunuch, needed help to understand what he was reading. God sent Philip to interpret the Scriptures for the eunuch.

“Dare I say that it is not stretching the point to affirm that Don Reasoner is upholding that tradition of facilitating smooth communication among us African church leaders in running the affairs of the church during our meetings? We are thankful to God for his services,” he said. 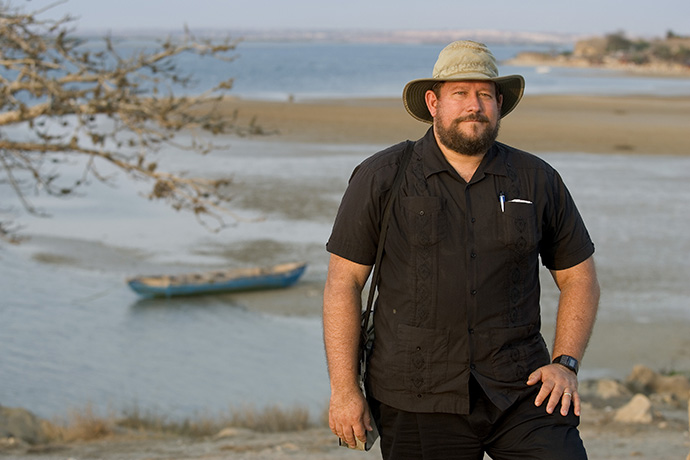 Donald Reasoner looks at the grounds of Angola’s National Slavery Museum, south of Luanda, in 2006. The museum is built on the site from which slaves were shipped to the Americas. Reasoner says he sees his vocation of interpretation “as a ministry, not just as a job or a profession. File photo by Mike DuBose, UM News.

Maintaining professionalism and confidentiality is essential for Reasoner.

“During executive sessions,” he said, “everyone else leaves the room, but I get to stay. I need to make sure information that has been shared is accurate.

“It’s a great privilege to do this work. I am blessed to have the opportunity to travel to different parts of the world and see the church being in mission,” Reasoner added. “It’s exciting to meet some of the living saints working in the church today.”

In 2020, after Reasoner had served as coordinator for language interpretation for 19 years, his position was discontinued. Undeterred, he formed Reasoner Language Solutions and became an independent contractor.

Widely traveled, Reasoner has been to more than 60 countries. He once averaged 20 trips a year, half of which were international, serving about 65 events a year. Sometimes, Reasoner prepared and shipped equipment for meetings where Spanish and Portuguese were used.

His bulky translation equipment ranges between one and seven large suitcases as he traverses the world to ensure people of different languages can communicate.

Over the years, Reasoner noted, he has built up a pool of 600 to 700 interpreters across the world, ensuring that local interpreters are hired to cut transport costs and promote their work.

Kelly Londoni has been a simultaneous and consecutive French interpreter and translator since 2003 and has worked with Reasoner in Zimbabwe since 2016.

“Don is a very good interpreter,” Londoni said. “He is humble, loves his work and has integrity. He always reminds us about confidentiality.”

Reasoner is married to Christie House, an editorial consultant for Global Ministries, and they have two daughters, one of whom has joined the Reasoner tradition of serving in mission.  Hannah, 26, was a Global Mission Fellow and is now a missionary in Colombia. Their older daughter, Rebekah Forni, 33, works with a solar energy company.

Chikwanah is a communicator in the Zimbabwe East Conference.