“We commission you to take the gospel of our Lord Jesus Christ into all the world.” Twenty-nine times the ancient phrase was intoned as The United Methodist Church sent new missionaries from 11 countries to serve in 16 lands.

The liturgy of commissioning, both solemn and joyful at the Oregon Convention Center, was believed to be the first as part of a United Methodist General Conference, the church’s policy-making assembly that meets every four years.

The new missionaries will serve as church developers, chaplains, teachers, health practitioners or administrators, agricultural specialists and youth workers. Six of the 29 will work in the health field. Four will engage in ministries with migrants.

Twenty-five are “global missionaries;” four are Church and Community Worker missionaries who will work in economically marginalized urban and rural communities in the United States. They serve through the denomination’s United Methodist Board of Global Ministries, which currently has some 350 missionaries in 60 countries, and projects and partners in 60 more.

The act of commissioning, including the laying on of hands, was conducted by a trio of bishops who serve as officers of Global Ministries. They were Bishop Hope Morgan Ward of North Carolina, president of the agency; Bishop John Yambasu of Sierra Leone, vice president, and Bishop Hee-Soo Jung of Wisconsin, president of the United Methodist Committee on Relief (UMCOR), a unit of Global Ministries. 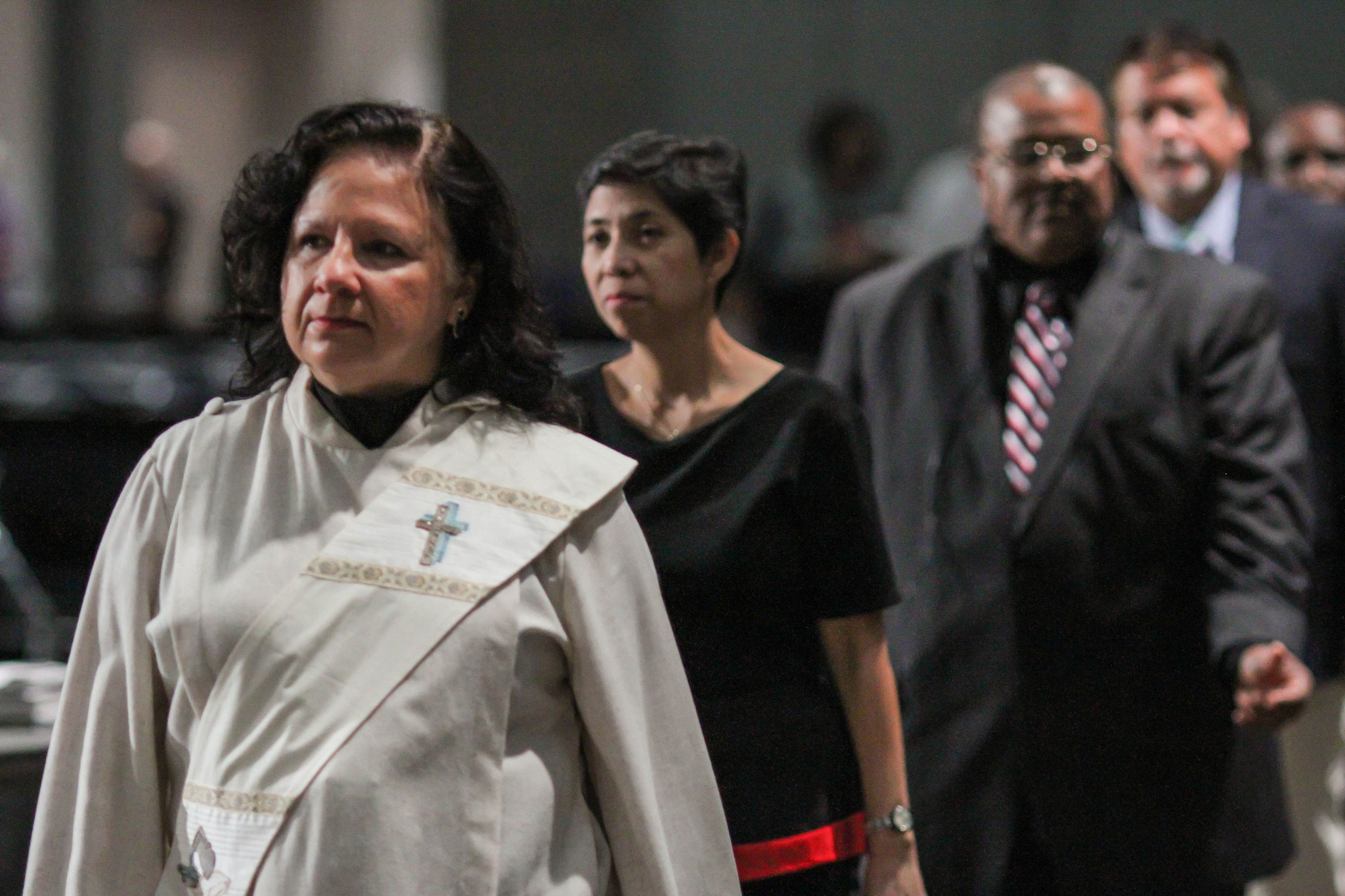 Missionaries process in during the May 19 worship service at the 2016 United Methodist General Conference in Portland, Ore. Photo by Maile Bradfield, UMNS.

Yambasu preached during the service of commissioning. Reflecting the 2016 General Conference theme, “Therefore, Go …” he urged United Methodists to “go out” beyond the walls of sanctuaries to serve the poor, the marginalized and neglected. “We have become too comfortable,” Yambasu said.

As part of his sermon time, Yambasu arranged to show “Beyond Bethlehem,” a short documentary on the plight of 3.5 million Syrian refugees. He called attention to the 6 million children who die each year from preventable diseases. He also said:

“In Asia, thousands of migrants are enslaved, misused and sexually abused each year in an effort to find a living and support their families back home.

“In Palestine, it is estimated that about 750,000 people have been forcefully uprooted from their ancestral homes since 1948, not counting the thousands who continue to be decimated by horrific Israeli weapons — bombs, missiles and shells that blow up men, women and children — with a quarter of the fatalities being children.”

Elizabeth and David McCormick from Louisiana will serve in Mozambique, two of the half-dozen new missionaries who will be working in health ministries. Both are assigned to the Chicuque Rural Hospital — Elizabeth as a pharmacist, and David as hospital administrator.

In a brief interview, David McCormick said his greatest expectation as a missionary is to “be a part of God’s mission and to build authentic relationships in grace, love and peace.” The McCormicks have two small girls.

A. Broncano is going from the Philippines to work with young people in Southeast Asia. She is excited “about sharing the lives of those with whom I will work in education and community development,” she said after being commissioned.

John Nday from the North Katanga Conference in the Democratic Republic of Congo is also going to Mozambique to the historic Cambine Mission, where he will work as agricultural coordinator. He looks forward to helping people increase food “production so they can take care of themselves.” Cambine has land used to grow food for a school and orphanage. Nday will also assist in the training of pastors for community outreach.

The service of commissioning emphasized the church’s global mission by readings of scripture in French, English, Kiswahili and Portuguese. Providing special music were the Cherokee Choir of the Oklahoma Indian Missionary Conference and the Choral Bethel dos Coqueiros of Bethel United Methodist Church in Luanda, Angola.

Elliott Wright, a veteran reporter who has covered six general conferences, is a consultant with the United Methodist Board of Global Ministries.