The first sessions of the Sierra Leone Annual Conference since the Ebola outbreak began with marching brass bands that brought together about 2,000 United Methodists. But the shadow of the deadly disease was still present in the memorial service honoring those who died.

The popular “march past” cultural celebrations, in which marchers process through the streets, were banned during Ebola. The processions included United Methodists from Sierra Leone as well as invited guests from Liberia, Cote d’Ivoire, Nigeria, Germany, Norway and the United States.

The 2015 annual conference meeting took place with harsh restrictions that aimed to curb the deadly Ebola virus — including a ban on street procession and a drastically reduced number of delegates.

The 136th session of the Sierra Leone Annual Conference with the theme “Claiming God’s Divine Promise” (Exodus 33:1) opened on March 10. Five brass bands played while marchers sang and processed about two miles from and back to the host, Brown Memorial United Methodist Church.

“We are slowly returning to normal ways,” said Isatu Conteh, a street trader who abandoned her wares to join the group of onlookers watching the throng of United Methodists march past.

In a sermon during opening worship, the Rev. Karsten Mohr, an elder from the United Methodist Church in Germany, said that when the church comes together, United Methodists experience fellowship across borders.

Mohr gave numerous examples of the goodness God intends for humanity and urged the faithful to stay hopeful even in the face of deprivation, unemployment, disease and other elements of abject poverty.

The conference held a memorial service to celebrate those who lost their lives during the Ebola epidemic, including 11 medical doctors and more than 200 health workers. Nearly 4,000 people died in Sierra Leone during the Ebola outbreak. 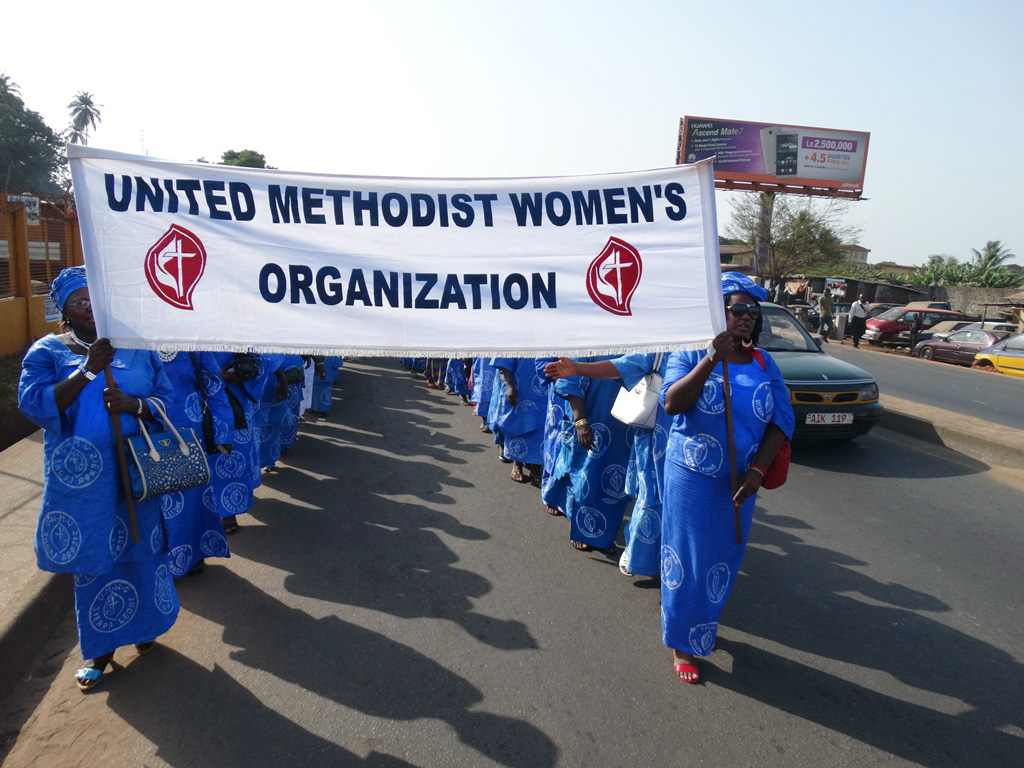 United Methodist women and several other denominational groups participate in the “march past” marking the beginning of the 136th session of the Sierra Leone Annual Conference. Photo by Phileas Jusu, UMNS.

Focus on the future

In his episcopal address, Bishop John K. Yambasu of the Sierra Leone Area said, “Someone told me that the most important thing we ever have to do is always ahead of us and not behind us. So at this conference, I would like to focus our attention to the most important missional priorities ahead of us.” He listed church unity, evangelism and church growth, innovative and life-changing ministries, intentional leadership development and aggressive fundraising as key goals.

“Can we be strong enough in our unity in Jesus Christ to find our common ground in him?” she asked. Middleton said Christians pray and discern God's will and believe they are being faithful; “yet, they have opposite opinions.”

The New York Annual Conference Board of Ordained Ministry announced March 1 that it would not consider sexual orientation in evaluating a clergy candidate, even if that individual has a spouse of the same gender.

For his part, Yambasu said the denomination’s attempt to deal with the issue of human sexuality is becoming complex.

“Many years on,” he said, “our long and painful journey towards integration suffered a setback when the now much divisive issue of homosexuality showed its ugly head.”

The bishop said that while many United Methodists thought the sexuality issue would “soon pass away,” it has become, in St. Paul’s words, “a thorn in our flesh” of the global church.

Yambasu said many delegates are approaching the 2016 General Conference with great apprehension because some conferences in the U.S. are more accepting of gay candidates for ordination.

“We continue to pray for our United Methodist Church so that God will save our denomination from collapse,” he said. “Without Scriptural faithfulness, we cannot effectively carry out lifesaving and soul-winning evangelical outreach ministries.”

Liberian Bishop John G. Innis also expressed hope that the issue of human sexuality would not break down the unity of The United Methodist Church.

“The basis of our discussion on this issue should be the Holy Bible and the denomination's Book of Discipline,” Innis said.

UM News posts the official summaries filed by annual conferences from around the connection. Find the latest reports on our archive page.
General Church

Some annual conferences will do a portion of their 2021 meetings in person as the coronavirus threat subsides. Resolutions on issues including sexuality and race will be considered.
Annual Conferences

United Methodist Communications has compiled a list of 2020 annual conference postponements and plans. The list is incomplete and additions will be made as further details are finalized.