The small house in Placetas, bought by the Methodist Church in Cuba to start a mission, had fallen even further into disrepair.

Luckily, before he became a pastor, 30-year-old Ricardo Rivero worked as an assistant mason.

Those construction skills helped prepare Rivero and his wife, Ana Maria Torres, 38, for the endless tasks and hard physical labor involved in a creating a habitable worship space and living area. There is no money to pay workers, but his father has assisted when he can. 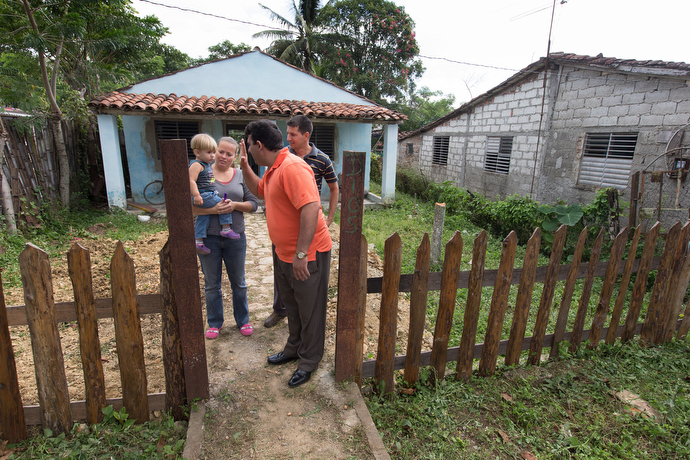 The Rev. Marcio Alcolea offers a high five to Ricardo David, son of pastor Ricardo Rivero and his wife Ana Maria Torres, who are starting a Methodist church mission at their home. Photo by Mike DuBose, UMNS.

Torres showed a series of photos on her laptop — part of the sound system for worship — that document the house’s previous condition, including damage from flooding after a rain. In three months, they have filled in the ground to prevent such runoff, removed a false ceiling, fixed the roof, repaired walls and installed a fence.

There is no plumbing yet in the bathroom or kitchen. “There is no sink to wash in,” she says. “We are here by faith.”

Still, aided by their son Ricardo David, a lively toddler, the couple is drawing nearly 30 people to worship in this small house.

“I know that God is doing new things in Placetas,” the pastor says. 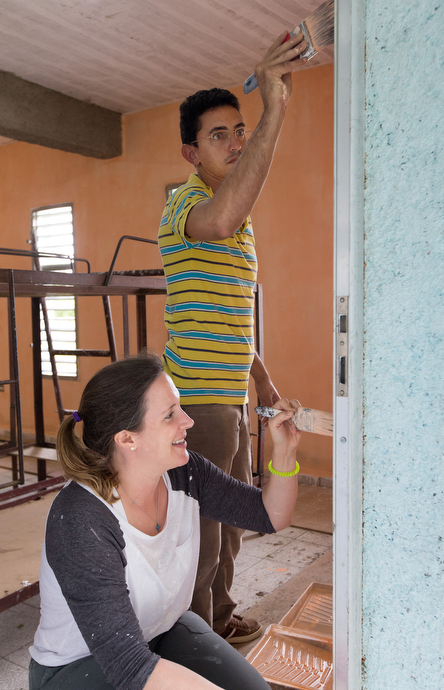 In a way, their story reflects the story of the Methodist Church in Cuba — accepting the struggle, doing the hard work and building relationships — while keeping the faith.

The rekindling of the relationship between Methodists in Cuba and United Methodists in the U.S. over the decades has not only renewed the Cuban church’s historic ties with the Florida Conference but also built a pipeline of practical assistance and spiritual exchange.

Through the United Methodist Volunteers in Mission program, U.S. work teams have been traveling to Cuba since November 1995. Initially, the focus was on Camp Canaan, a large church retreat property outside the city of Santa Clara, says Aldo Gonzalez, national coordinator for UMVIM-Cuba on behalf of the United Methodist Board of Global Ministries.

An earlier camp was lost after the revolution. But in the 1990s, the church was able to buy land from a farmer and approached the government about creating a new camp. “The government allowed us, for the first time, to have brand new buildings,” Gonzalez says.

An agreement with the Cuba’s Office of Religious Affairs that allowed in one team of up to 12 members each month was expanded to two teams when renovation began on the building housing a new seminary in Havana. Now, on average, 20 UMVIM teams visit Cuba each year, he reports. The latest project is the construction of six homes for seminary professors.

But Camp Canaan, about 20 minutes from Santa Clara near the town of Miller, remains a favorite destination. In November, a six-person volunteer team was working there, led by Derial L. Ogburn, chairperson of the South Carolina Conference’s UMVIM program. 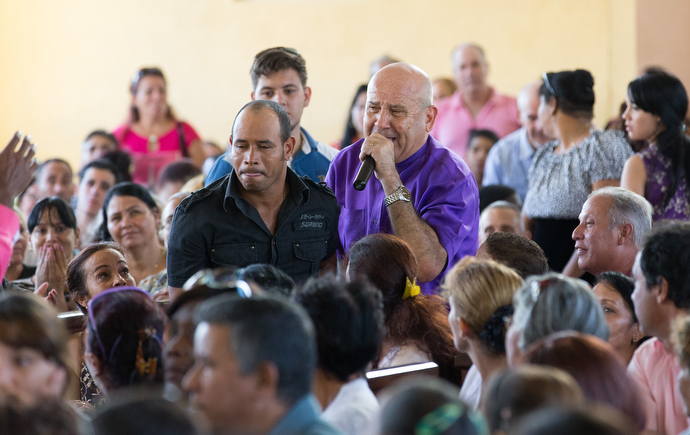 Bishop Ricardo Pereira leads people making a commitment to Christ up the aisle during worship at Marianao Methodist Church in Havana. Photo by Mike DuBose, UMNS.

While the men pour concrete for a sidewalk behind a dormitory building, the women, brushes and rollers in hand, are inside learning more about applying Cuban paint and primer to a room.

Williams, on tiptoe, is painting the edge of the wall near the ceiling. She likes watching the horses and goats in the yard outside the window. This is her third trip to Cuba, but her first experience at the camp. After finishing, Williams takes a photo of the room, which, she says, “looks a lot better than Monday.”

Among the Cuban staff on hand is Alba Marina Acosta, a former English teacher. For the past nine years, she has served as the church’s translator for volunteer teams.  “They ask me many questions about Cuba, the Cuban culture, my family,” she says. “They don’t have any clear idea about Cuba when they are in the States.”

Solidarity and service in Cuba 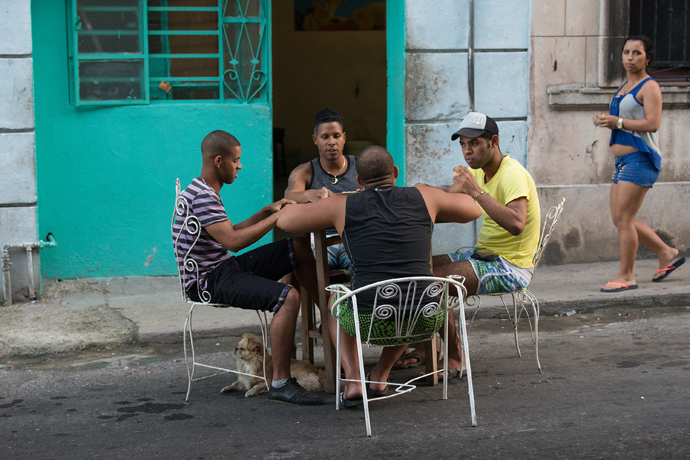 In Havana neighborhoods, people seem to know everyone and hear everything. “The thing about Cuba is we have learned to help one another – solidarity. Life here is very sociable.”

Dormitories are crucial at Camp Canaan because the Methodist church’s most important annual events occur there, says Onel Goméz, the camp’s principal since 2014, who lives on the property with his family. Other denominations also use the camp.

Currently, up to 700 people can stay on the property at one time, which means events that draw more than that number, such as retreats for women and for youth, meet twice a year. Besides the dormitories, facilities include a worship space with 490 fixed seats and the capacity for more. The camp has pastoral houses, a cafeteria and small shop and a pool.

“The building of this camp was a dream for us,” acknowledges Goméz, who previously was employed by the Cuban government as a tunnel construction engineer.

The dream is not quite finished. The church has the support of the government to build three more dormitories and another building that’s more like a hotel. “We thank God for UMVIM teams, because they have been a blessing for the Cuban people,” he adds.

The easing of outside restrictions on Cuba also have been a blessing.  For many years, because of the U.S. embargo, United Methodist Volunteers in Mission was the only conduit to send funds raised by United Methodists through The Advance to support Cuban churches and projects, Gonzalez says.

But times have changed, he points out. The Board of Global Ministries finally obtained a license to send funds through Canada. Cubans in the U.S. send an estimated $1.4 to 4 billion dollars annually to family members, helping grow the economy. And Cuban church members are providing support through their tithes.

At present, Gonzalez says, members at Marianao, the bishop’s church, can tithe “to the point where they can help four or five other churches survive.” 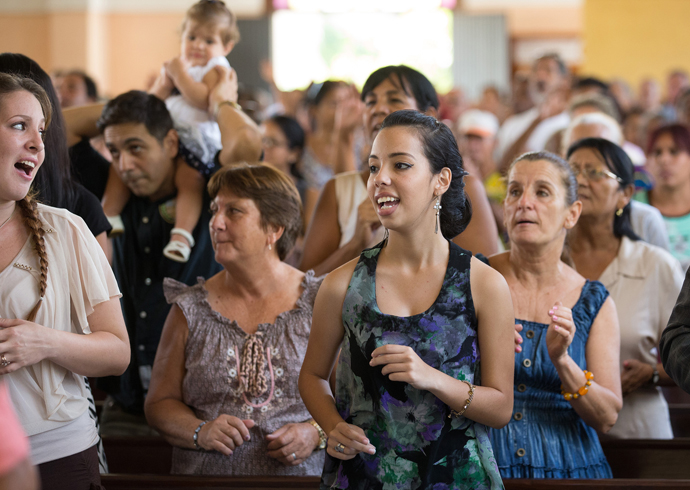 During a Nov. 13 sermon at the church, Bishop Ricardo Pereira makes a case for the dedication of both the congregation and the church at large. When Marianao marked an anniversary the previous week, the sanctuary, downstairs and yard were filled with people, he reminds them. The worship team is training more church musicians, seminary extension classes have opened across Cuba and church teams are providing hurricane relief.

“When the government says we need the church to be more present in education and in health, we know the church is there,” he adds.

More people are coming to Christ. “These are good times,” the bishop asserts. “These are the times of salvation in Cuba.”

Ahead of the United Methodist Church of the Resurrection’s 2021 Leadership Institute, UM News spoke to the Rev. Adam Hamilton about the pandemic and proposed denominational split.

Take a trip around the world and around the connection through the eyes of long-time United Methodist photographer Mike DuBose. World Photography Day, Aug. 19, honors the importance of cameras and photography in documenting memorable events.
Mission and Ministry

Ministry on the river celebrates 15 years