Seventeen-year-old Caton Darling nailed down blue tarp on the roof of his house while his dad, Eric, leaned on the bed of his pickup truck, keeping a watchful eye from the battered front yard of their Lake Charles home.

Hurricane Laura roared onto the southwest coastline of Louisiana as a Category 4 with winds of 150 miles per hour on Aug. 27, downing trees and power lines and killing 26 people. The Darlings, like many, are still without electricity, and — since they have an electric water pump —without water.

“I was here for Hurricane Rita, this storm made that look like a baby,” said Eric Darling, a retired police officer. His son, a high school senior this year, was adopted from Guatemala and he said it had just been the two of them since the boy was 3.

“It’s me and him all the way,” his father said. 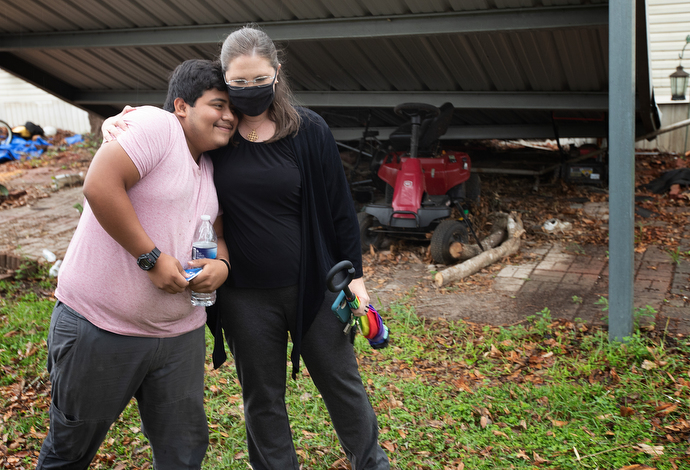 The Rev. Angela Bulhof hugs Caton Darling during a visit to his home in Lake Charles, La., to check on the progress of repairs following Hurricane Laura. Bulhof is pastor of University United Methodist Church in Lake Charles, where Darling and his father serve as ushers. 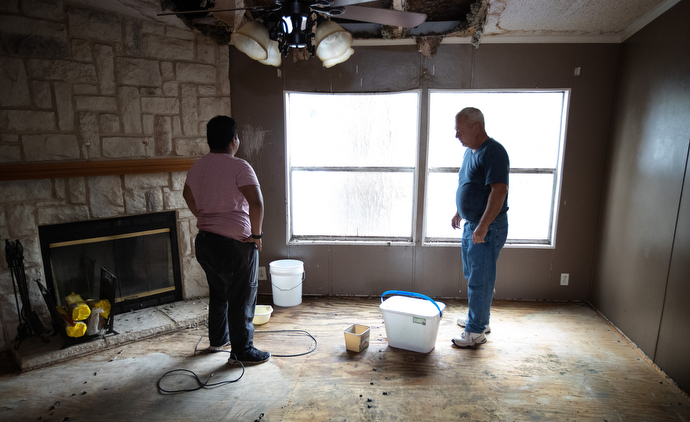 Caton Darling (left) and his father, Eric, arrange containers to catch drips of rainwater at their home in Lake Charles, La., which was damaged by Hurricane Laura.

Caton Darling’s school started last week online, but he’s not too concerned about school today. “I can’t leave my buddy alone with this mess,” he said.

After evacuating, they returned to find a huge tree across their driveway and others crashed into the roof of their living room.

“As of today, it looks 10,000 times better,” Caton Darling said. “You take your good days. Before, your worst day is a C-minus on a test, today a bad day is not being able to get inside your house. It changes a lot of stuff.”

A home built on piers to protect it from flooding stands open to the elements near Grand Chenier, La., after Hurricane Laura tore off the front wall and destroyed the roof. 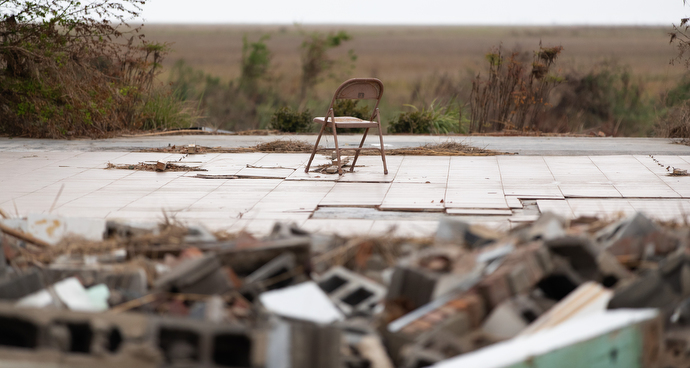 A solitary folding chair rests on the bare concrete slab that was home to Grand Chenier (La.) United Methodist Church before Hurricane Laura destroyed the building.

The Rev. Angela Bulhof, their pastor at University United Methodist Church, came by the house to check on them and give them a Kroger gift card.

“It weighs so heavy, not only on the community, but every person. If you were already vulnerable, it hits you where it hurts,” said Bulhof, who had started her day burying a church member.

Give to the United Methodist Committee on Relief’s U.S. Disaster Response and Recovery through Advance #901670
Donate to the Louisiana Conference disaster response ministry.

The church suffered extensive damage, too, with one brick wall collapsed and roofs partly torn off all the buildings.

Bulhof, who started at University on July 1, said a recent visit from Louisiana Bishop Cynthia Fierro Harvey really made a difference to her. “She told me to pace myself. It helps to hear those words — in her voice —in my head.”

Harvey said she tells her pastors to remember they are in it for the long haul.

“We have had quite a year — COVID, economic challenges, racial injustice and now natural disasters. Any one of those would be enough. All at once is more than some of us can handle,” Harvey said.

“We have also learned that while our spaces are sacred and holy that the true sacredness and holiness is in God’s people.” 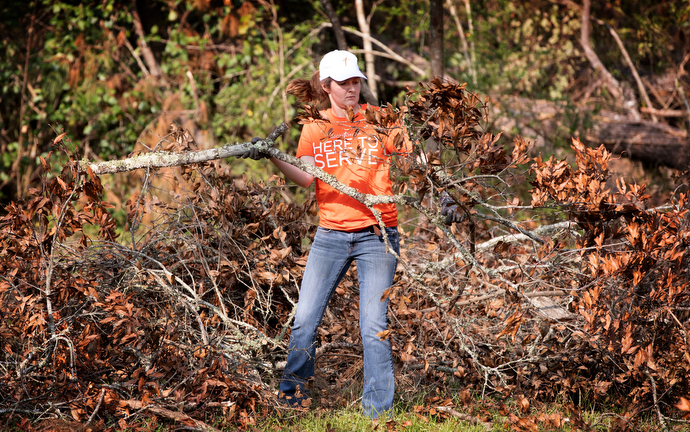 Todd Furman sat alone under his house, which is raised up on pilings. He was on hold with an insurance agent as the blue tarp on the side of his house flapped and shredded in the wind and rain. Bulhof brought him some plastic sheeting and a staple gun.

Furman’s wife and three children are in a hotel in Baytown, Texas. The family is moving into the home of Bulhof’s son and daughter-in-law, who will move back in with their parents. All three of the Furman children are scheduled to start back to school soon. Their daughters, 17 and 15, will start back virtually, but his son’s school will open for in-person classes.

Furman’s wife is head pharmacist for Memorial Women’s Hospital in Lake Charles. She stayed behind because she is on the neonatal intensive care unit staff and 19 vulnerable newborns had to be moved to safer ground.

Furman said she told him, “I’m not leaving my babies.” (CNN reported on the story.)

“The most terrifying part was being without my wife while she was in the grips of the storm,” he said. 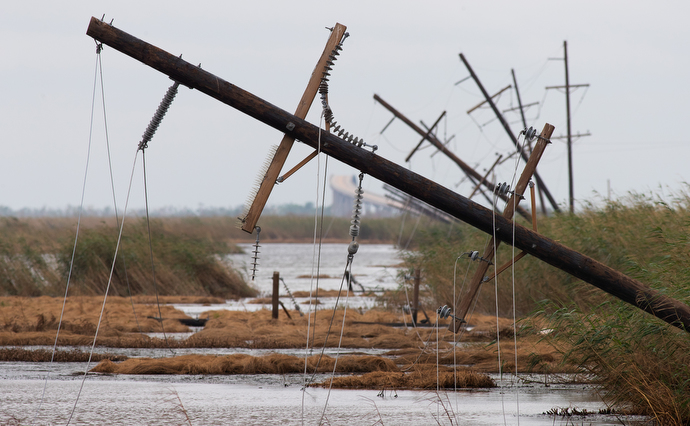 Power poles toppled by Hurricane Laura lie alongside the West Creole Highway near Cameron, La. The Category 4 storm left thousands without power. The Conway LeBleu Memorial Bridge over the Intracoastal Waterway is visible in the background.

The Lord is My Shepherd

People greeted each other with questions about home damage and electricity.

The Rev. Mark Bray greeted one older couple dressed in their Sunday best. “Somehow you found a suit in the dark? And you found matching socks,” he joked.

Bray was preaching from the 23rd Psalm, “The Lord is My Shepherd,” when cell phones started blasting emergency signals regarding Tropical Storm Beta.

Startled, everyone looked around, chuckling, and the service continued.

Bray said the church stopped meeting in person because of COVID-19. This service was held in the church gym with plastic chairs socially distanced on the shiny wood floor emblazoned with the Cross and Flame. 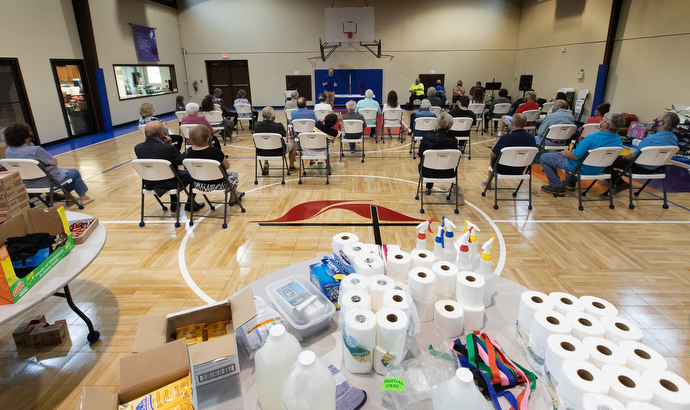 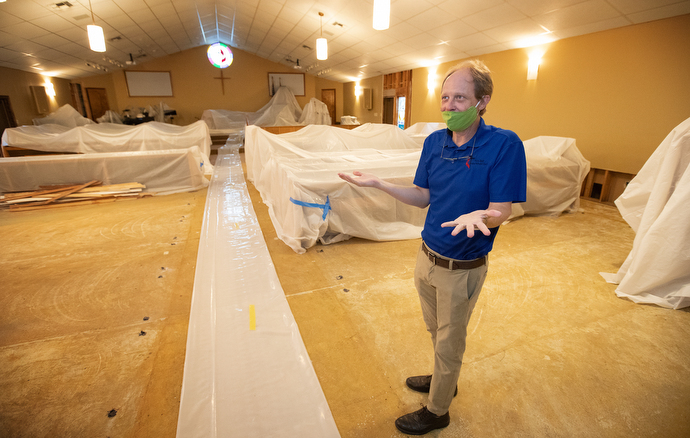 The Louisiana Conference held a workday on Sept. 19 in Deridder, a town about two hours inland from where the hurricane made landfall.

A group of students from the Louisiana State University Wesley Foundation drove three hours to make the 8 a.m. start.

“It breaks my heart to see people in so much devastation and if I am able to do so, I feel called to go and help them,” said Zac Henderson. He and friends were lugging a huge log from the back of an elderly woman’s house to a large pile of debris in front.

“I remember there were times when I was just so tired from having to do cleanup and recovery work and I would look up and see people from all over the country still showing up. That gave me hope to keep pushing forward. Just like people were a beacon of hope for us, it is important to be beacons of hope for other people.”

“We have a cool wind, the sun rises and the son Jesus Christ give us hope,” she said as the teams headed to work sites. 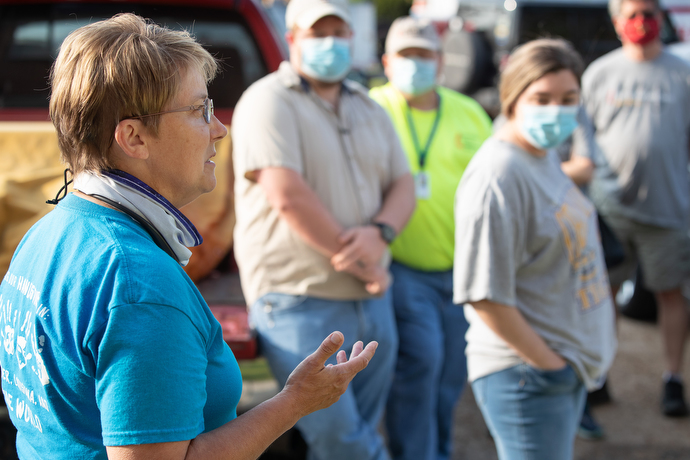 The Rev. Laraine Waughtal briefs volunteers as they prepare to clean up debris left by Hurricane Laura in DeRidder, La. Waughtal is pastor of First United Methodist Church in DeRidder and a former disaster response coordinator. 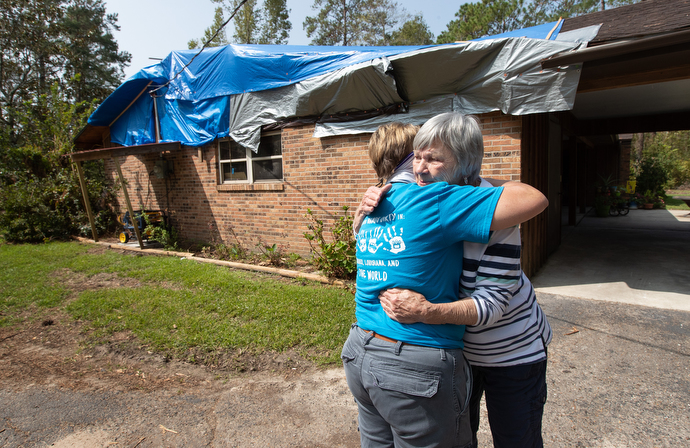 Mary Alice Wisdom (right) hugs her pastor, the Rev. Laraine Waughtal, during a visit to Wisdom’s home in DeRidder, La., following Hurricane Laura. The hurricane damaged her roof and knocked out electricity.

Waughtal took time to visit a church member, too.

Mary Alice Wisdom, a widow who evacuated to Jackson, Mississippi, along with her daughter and golden retriever, said a neighbor called to tell her a tree had fallen on her house.

She had trouble finding a generator and getting contractors to inspect her home, but talked about the ways the church and her sons-in-law came to her rescue.

Waughtal took Wisdom’s hand and prayed, while the golden retriever nuzzled the women.

“Loving God, I thank you for Mary Alice, I thank you that she and her dog are safe. Lord just be with her as she goes through this recovery process may she know your presence. May you fill this house with the presence of your Holy Spirit. May she know your comfort and peace, be with her, guide her to the right people to help in this recovery. All these things we ask in Jesus name, Amen.” 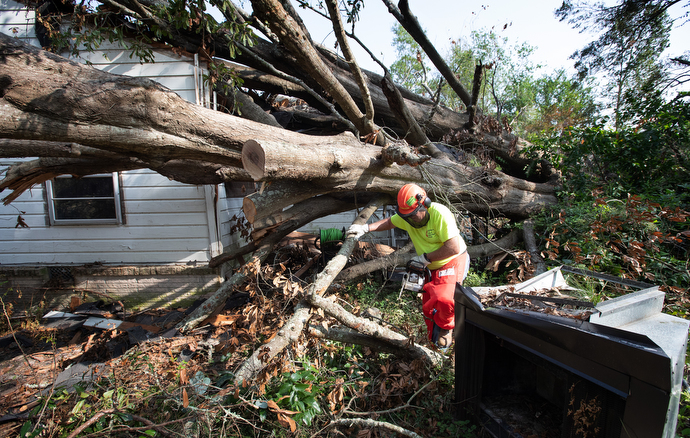 Volunteer John Meier works to remove a fallen tree from a home in DeRidder, La., following Hurricane Laura. Meier is a member of the Early Response Team of the Louisiana Conference of The United Methodist Church.

In another neighborhood, John Meier, a member of the Early Response Team of the Louisiana Conference, was sawing large trees that had fallen on Kelvin Blake’s house.

“I was down here two weeks ago and we went 25 miles east and 25 miles west and you can’t drive a hundred yards without see a tree down,” he said.

Blake is grateful for the help. 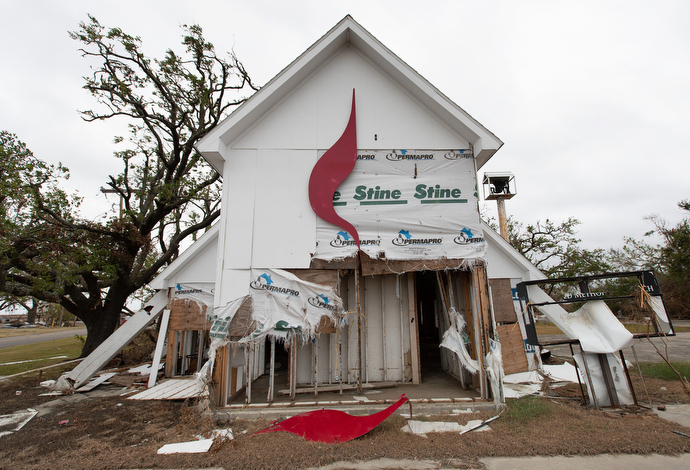 It’s a long, strange drive south on Louisiana Highway 27 from Lake Charles to Grand Chenier. Lake Calcasieu and Grand Lake flooded from the Hurricane Laura storm surge and alligator carcasses became a familiar sight, along with an awful smell.

The narrow road is clogged with electric power trucks and sometimes airboats, while twisted power lines and damaged houses line the road. 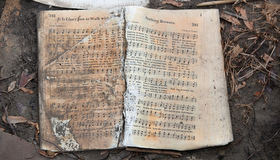 Grand Chenier is a slab and debris, with a copy of the Lord’s Prayer in the rubble. Brightly painted pieces that look like they once cheered up a Sunday school room lie in the mud and mire.

Several miles down the road, the roof of Cameron, Wakefield United Methodist still stands, but the inside of the church is blown out. A cemetery behind the church looks damaged, with tombs no longer laid out in perfect lines.

Yorks said Sweetlake suffered roof damage and will have to be gutted.

“Amazingly, we have an antique piano and the pianist had closed it up so no water got to that,” he said.

Yorks, also a full-time school music teacher, said some of the high school students he taught 30 years ago sent supplies for the people along the coast.

“When I took my vow to be a minister, my mentor took me under his wing. He always told me it is more than just a job, it is your life.”

“Ministry is my heart.” 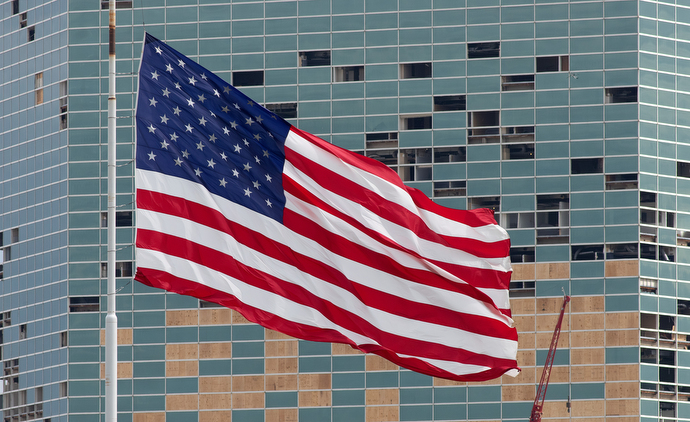 A United States flag flies in front of the Capital One Tower in Lake Charles, La., following Hurricane Laura. The storm shattered many windows in the office building, some of which have been boarded up with plywood.

Asbury United Methodist Church in Lafayette is serving as the supply depot and distribution site for hurricane relief efforts for the Louisiana Conference.

Early on Sept. 22, men from the North Carolina Conference were packing up supplies for hard-hit areas.

Lou Groth and his wife, Carol, were busy with supplies, too, while in the kitchen Libby Ricky and Joy Fincke were separating big bags of rice into two-quart bags.

“Isn’t grace amazing,” one of the volunteers said. 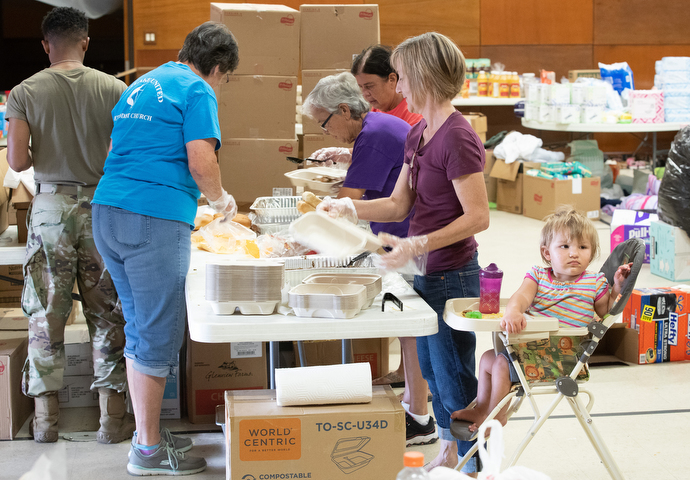 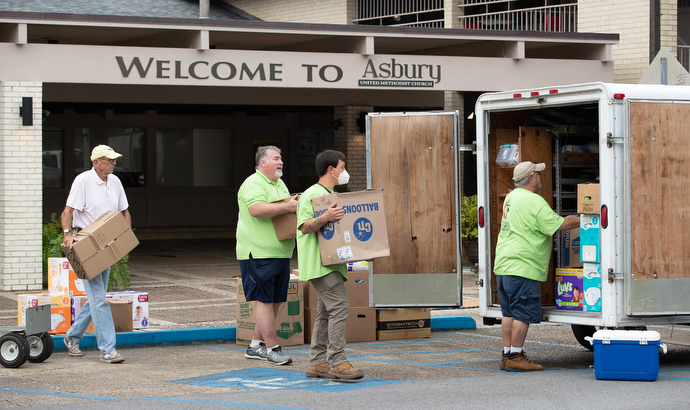 Gilbert is a writer and DuBose is staff photographer for UM News. Contact them at (615) 742-5470 or [email protected] To read more United Methodist news, subscribe to the free Daily or Weekly Digests.